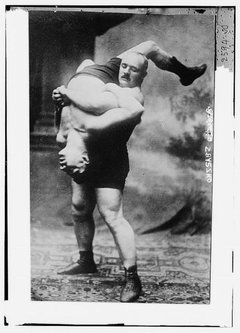 The following is an article from the book Uncle John's Ahh-Inspiring Bathroom Reader. Classical "Greco-Roman" wrestling can trace its roots all the way back to the ancient Greeks and romans. But what about "professional" wrestling -the kind where costumed buffoons hit each other with folding chairs? How old is that? Older than you might think.

In 1915 some fight promoters organized an international wrestling tournament at the Opera House in New York. A rising star named Ed "Strangler" Lewis headlined a roster of other top grapplers from Russia, Germany, Italy, Greece, and other countries. These were some of the biggest matches to be fought in New York City that year. There was just one problem: almost nobody went to see them.

Wrestling, at least as it was fought back then, could be pretty boring for the average person to watch. As soon as the bell rang or the whistle was blown, the two wrestlers grabbed onto each other and then might circle round ...and round ...and round for hours on end, until one wrestler finally gained an advantage and defeated his opponent. Some bouts dragged on for nine hours or more. Wrestling could also be hard to understand, which made it even more boring. In baseball, an outfielder either caught a fly ball or he didn't. In football, the person with the ball either got tackled or they didn't. Wrestling was different -when two grapplers circled for hours, who could tell at any point in the match who was winning? Did anyone even care? 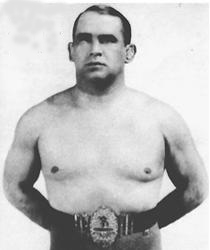 Ed "Strangler" Lewis Even by wrestling standards, 1915 was a particularly boring year because the world's youngest and best wrestlers were all off fighting in World War I. Those that were left were often past their prime and not very entertaining. Not surprisingly, the organizers of the tournament at the Opera House were having trouble filling seats. For the firs day or two it looked like they were going to lose a lot of money. For the first day or two.

Things were about to change, thanks to one spectator. He was huge, but he didn't stand out just because of his size -he stood out because he was wearing a black mask that covered his entire head. There was no explanation for what the man was doing there or why he was wearing the mask. He just sat there watching the matches each day, and when they ended he left as silently as he came. Then, a few days into the tournament, the masked man and a companion suddenly stood up and loudly accused the promoters of banning the masked man from the tournament. He was the best wrestler of all and the promoters knew it, they claimed. That was why he was being kept out of the tournament, and they demanded that he be let back in. Security guards quickly hustled the pair out of the building, but they came back each day and repeated their demands, generating newspaper headlines in the process. By the end of the week, much of New York City was demanding that the masked man be allowed into the tournament. 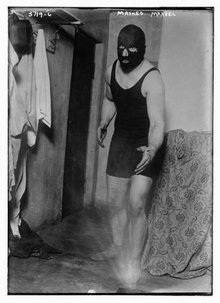 aturday, the promoters gave into the pressure and agreed to let him compete. Just days earlier, some of the world's most famous wrestlers had battled one another in a nearly empty Opera House. No one cared. Now throngs of New Yorkers ponied up the price of admission to watch the mysterious masked man fight, even though -or more likely because- they had no idea who he was or whether he even knew how to fight. Sure enough, the Masked Marvel delivered -although not quite as much as he promised, because he lost one match and only wrestled "Strangler" Lewis to a draw. But he whipped everyone else he wrestled, bringing the packed tournament to a thrilling end. Considering the amount of excitement that led up to those final bouts, it's a good bet that the people who saw the masked man fight remembered the experience for the rest of their lives.

The following year, the Masked Marvel was officially unmasked after losing a match with a wrestler named Joe Stecher. He turned out to be... Mort Henderson, a railroad detective from Altoona, Pennsylvania, who made his living throwing hobos off trains when he wasn't in the ring. Henderson had wrestled for years under his own name, but he lost many of his matches and had gone nowhere in the sport. Even when he wasn't wearing a mask, no one knew who he was. So how did Henderson do so well at the Opera House? The whole thing was a setup -the promoters planted him in the audience hoping that he would generate publicity and sell tickets. The other wrestlers were in on the scam, too; that's how he won so many fights. Many New Yorkers realized that they'd been had, but nobody seemed to mind. The Masked Marvel was fun. 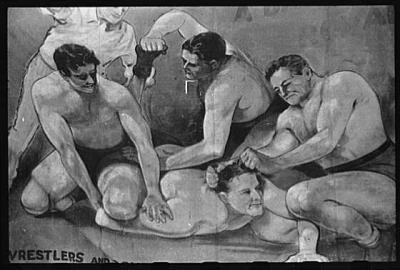 Wrestling had long been full of colorful characters. After all, legitimate professional wrestling traced its roots back to the days when carnival strongmen traveled the country offering cash prizes to any locals who could pin them to the mat. By 1915 wrestling had matured into a legitimate sport, a test of strength and skill, not quite as exciting as boxing but still a sport that took itself seriously. Mort Henderson could not have realized it at the time, but on the day he donned his mask the first time in 1915, he changed professional wrestling forever. It was "at this point," Keith Greenburg writes in Pro Wrestling: From Carnivals to Cable TV, "promoters began copying techniques from vaudeville to keep spectators interested."

PUTTING ON A SHOW 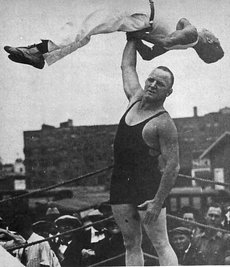 A lot of credit for changing pro wrestling into what it is today goes to a former vaudeville promoter named Joseph "Toots" Mondt. Mondt saw wrestlers as little different from theatrical performers, and their matches as just another act to be managed so that profits were maximized. Rather than let a match run on for hours, he set time limits, which allowed him to book more fights back to back. His traveling troupe of wrestlers fought the same fights -with the same rigged outcomes- in every town they visited. Since the wrestlers didn't have to focus on winning, they were free to thrill audiences with moves like flying drop kicks, airplane spins, and leaps across the ring feet first to kick opponents in the chest. Landing fake body blows like these -ones that appeared devastating without actually causing serious physical harm- was elevated to a fine art. "When a grappler threw a punch, he tried to connect using a forearm instead of a fist, softening the blow," Greenburg writes. "A man diving on a foe from the ropes actually grazed the man with a knee or elbow, rather than landing on him directly and causing injury."

The next big wave of innovation came during the Great Depression of the 1930s, when dwindling ticket sales forced promoters to resort to even greater gimmickry to draw crowds. Wrestler assumed false ethnic identities so that blue-collar immigrants could root for someone of their own ethnic group, and also to capitalize on whatever geopolitical goings-on might make for an interesting villain. Evil German counts and Japanese generals were popular during World War II; in peacetime, crazy hillbillies and snooty English lords filled the bill, grappling with noble Indian chiefs and scrappy Irish brawlers that the audiences loved. 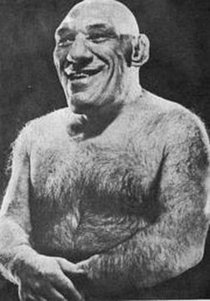 Maurice Tillet Wrestlers fought tag-team matches. They battled it out in cages. They wrestled while chained together. They fought in rings filled with mud (of course) as well as ice cream, berries, molasses, and other gooey substances. Women wrestled. Midgets wrestled. Giants wrestled. Morbidly obese people wrestled, and so did people with disfiguring diseases. Maurice Tillet, the French Angel, suffered from a glandular disease called acromegaly that gave him enlarged, distorted facial features. He was such a successful villain that he spawned a host of imitators, including the Swedish Angel, the Golden Angel, the Polish Angel, and the Czech Angel, a number of whom suffered from the same disease.

What happened the the "genuine" professional wrestlers, the guys who refused to showboat and took their sport seriously? They continued to wrestle one another in honest matches for legitimate championship titles. In 1920, for example, Ed "Strangler" Lewis won a world championship match against Joe Stecher in a three hour-long bout; he held the title off and on for the next 13 years. After that the title turned over several more times before it passed to a wrestler name Lou Thesz, who would win and lose it several times into the 1950s. Not that anyone cared. Thesz wasn't above a little showmanship -his specialty holds were the Kangaroo and the Airplane Spin- but "there was little interest in the championship among the public," Graeme Kent writes in A Pictorial History of Wrestling. "This was mainly because Thesz scorned gimmicks, relying on his wrestling ability to carry him through."

Yet it was a gimmick at the end of World War II that would provide the biggest boost to professional wrestling. The emerging medium of TV ...will be covered in part two of this post from Uncle John's Bathroom Reader. 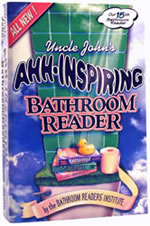 This article is reprinted with permission from Uncle John's Ahh-Inspiring Bathroom Reader. Where else but in a Bathroom Reader could you learn how the banana peel changed history, how to predict the future by rolling the dice, how the Jivaro tribes shrunk heads, and the science behind love at first sight? Get ready to be thoroughly entertained while occupied on the throne. Uncle John rules the world of information and humor. It's simply Ahh-Inspiring! Since 1988, the Bathroom Reader Institute had published a series of popular books containing irresistible bits of trivia and obscure yet fascinating facts. If you like Neatorama, you'll love the Bathroom Reader Institute's books - go ahead and check 'em out!