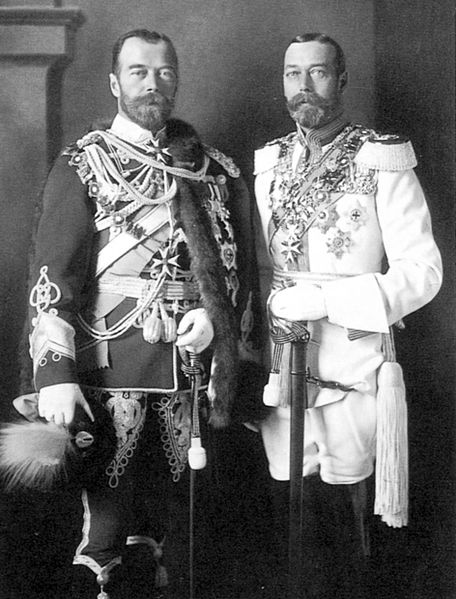 Can you distinguish which man in this picture is Czar Nicholas II of Russia, and which is King George V of England? The two monarchs were cousins born only three years apart. Can't decide? The answer is at The Ornamented Being. http://ornamentedbeing.tumblr.com/post/3817138206 -via TYWKIWDBI

St. Nicholas the Czar Martyr is on the left in the darker uniform. George Windsor on the right in the white uniform.
If Kaiser William stood next to these cousins, he'd be the easiest to spot because he dressed like a buffoon.
Abusive comment hidden. (Show it anyway.)
ooops delete the ")" from the Wikipedia link
Abusive comment hidden. (Show it anyway.)
@Ioann

Well the "Kaiser" wore a russian uniform on visit simply because he was officially appointed admiral of the russian navy. And well, he had also the admirals title of the English navy, so you could find pictures of him in an english admirals uniform too. ;)
And its not some eccentricity exclusive to the kaiser - you err on the english/russian uniform - both the Csar and English King are shown wearing german uniforms on that photo ;) (photo with descr. can be found at http://en.wikipedia.org/wiki/George_V_of_the_United_Kingdom)

And by the way the Kaiser was another cousin to them. William and King George V grandma was Queen Victoria.
And while not being 1.degree cousins like George V and Nicholas II who share the danish king Christian IX and Louise von Hessen as their grandparents, the wife of Nicholas was a cousin of William. So all one big family
Abusive comment hidden. (Show it anyway.)
What makes it even more confusing is that Nicholas is wearing a British uniform and George is wearing a Russian uniform. It was common for sovereigns at the time to wear a uniform from the visiting country as a sign of friendship. Even the Kaiser wore a Russian uniform when he visited St. Petersburg before the war.
Abusive comment hidden. (Show it anyway.)
One of them has a thinner face.
Abusive comment hidden. (Show it anyway.)
Login to comment.