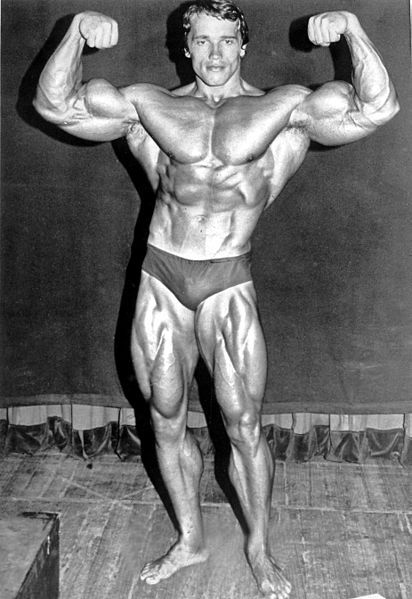 This piece of work presented itself by accident. As a retired clinical scientist, I waste time worrying about problems I’ve opened and left unclosed. One such is stretch marks,1 and the body bulk that produces them. Would body builders carry some of the answers? These massive men downloaded with sylph-like ease, but then ousted the original problem with a bigger one, albeit of smaller amplitude: it was immediately and inescapably obvious that the bodybuilder’s crutch was mostly apparent by its absence – in short, bodybuilders appeared to have small balls.

Platitudes are what we learn from experience: there are lies, damned lies and clinical impressions, and a clinical hunch is poor evidence of its reality; I needed hard evidence. I needed to see body builders, but the responses, some of which were polite, made it clear that my study would have to be indirect. Fortunately, research is easier when its limits are defined: the trick was going to be how to measure changes in the male genital trio, the “meat and two veg” of this scientific meal, when it is covered and presented as an image.

I was downloading images of male ballet dancers and models from catalogues of swim- ‘and underwear, for comparison, when my wife appeared with a coffee. She wanted to know whether there was an unexpected marital problem, and departed with the view that both the project and I were nuts, and that I might now be on a police list of dubious old men. The pursuit of science has always had its problems and, in recompense, it consoles me to think I may have gained some colleagueship with a forebear as distinguished as Galileo, who had also spent much time observing the spheres. I played with the images to decide what methods of quantification might be possible. Three dimensional assessments using width of the shadows of the genital mountain failed, because lighting and position were not standardised. So a two-dimensional frontal presentation was accepted; genital mass could easily be measured by its cross-sectional area, as marked circumferentially 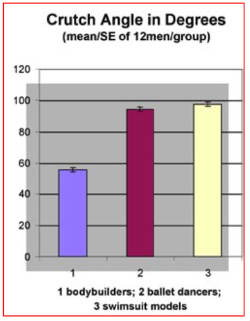 Crutch or genital volume, measured as a cross-sectional area in pixels, and expressed as a function of underlying muscle-free body size, measured as distance in pixels between each iliac crest. The columns give the mean and standard error for each group of 12 bodybuilders and swimsuit models, and shows that the ratio of crutch volume to underlying body size is greatly diminished in bodybuilders.

In defining the genital area I was particularly struck by one man: in contrast to a massive frame, his genital triangle was a disaster: something was missing. His genital bulge was mainly a central penile cylinder from which his briefs went steeply downhill, unimpeded by testicles between it and his crutch. As I stared in aimless wonderment, the defining feature of the bodybuilder’s crutch suddenly became apparent (in science, you only discover what you first imagine): the normal, obtuse- angled V of the crutch is replaced by a narrow, acute- angled V. And this measure is simply obtained from the observed angle to the horizontal of each limb of the V. This was my Eureka moment -- for which the laptop has long replaced the bath.

Research is more Tristram Shandy than scientists might want to admit: here I was, all post-Eureka and ready to go, only to reach another diversion. Could what I’d noticed simply be a visual artefact – had the crutch been made to look trivial by the surrounding mass of muscle? Absolute measurements could not be made, but weren’t necessary anyway: far better to relate crutch dimension to the underlying skeletal body size, free of muscle mass. The iliac crests are obvious on the images, and because they are not covered by muscle, the distance between them provides a good, measure of underlying body size. Thus, the ratio provided by “correcting” genital area for the inter-iliac crest distance gives an absolute measure of genital size as a fraction of underlying body size, and would show conclusively whether the visually tiny testicles of bodybuilders are an optical or a biological artefact.

Measurements: From each group of images, the first 12 were taken that were frontal with little body rotation, and with legs together or only loosely apart. On each of them I made 3 independent measurements of crutch area, crutch V angle and inter-iliac crest distance, all in pixels, using the downloaded Image J program; agreement of replicates was good. Descriptive statistics were done for each group, and t-test comparisons were made between the bodybuilders and the other groups. 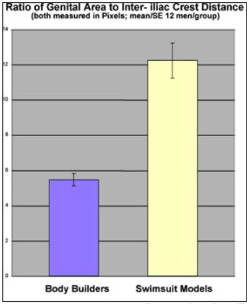 ch V or genital angle, measured in images of male bodybuilders, ballet dancers and swimsuit models. The columns give the mean and SE for each group of 12. The crutch angle is much less in the bodybuilders. The results are shown in Figures 1 and 2. Genital area was remarkably less in bodybuilders than in men wearing swimwear briefs, and this difference was very significant; the same was true for their Genital V, or crutch angle.

Measurements on downloaded images show that bodybuilders have a much small genital area and Genital V angle. Three dimensional measurements of genital mass could not be made, but cross-sectional area gives a reasonable approximation. Although these measurements can only be relative, by correcting them for underlying, intrinsic body size, using inter-iliac crest distance, an absolute measure can be obtained of crutch volume as a function of body size. This measure shows that the reduction in crutch size in bodybuilders is real, and is not simply a minimisation of the visual image by the surrounding mass of muscle. The reduction was seen by comparison with all groups; it is particularly significant for the swimwear group, because very similar briefs were worn and, unlike with underclothing, models appeared not to have been selected because of an ambitious crutch. And, whilst the tights worn by ballet dancers may have provided a somewhat different external crutch shape but not crutch size, it is more likely that dancers are chosen more for elevation of jump than genitalia. Thus the consistency of the findings throughout all other male groups adds to its significance, and allows the firm conclusion that bodybuilders have a small crutch. Unlike all the other groups, bodybuilders have virtually no subcutaneous fat; this will have artificially increased their crutch area ratio, making the observed reduction in crutch size an underestimate.

To what is this reduction due? The images show that the reduction in genital mass is not due to penis size, but to tiny testes. Tiny testicles are also the immediate cause of the narrowing of the Genital V angle, which is such a striking feature of the bodybuilder’s pose. What explains this shrinkage of the bodybuilder’s balls? Since it is unlikely that only men with small balls undertake bodybuilding, we have to assume that small balls are causally related to this activity. Could these crypto-orchids be an adverse consequence of the pathological amount of exercise necessary to produce the vast amount of muscle? Is there a functionally inverse relationship between testicle size and muscle mass? Did Delilah find more to Sampson than was made public?

It is well known that extreme exercise affects the endocrine system: for example, it explains the small breasts of ice-skaters2 [see “Ice Skaters Have Small Breasts,” in this issue of AIR] and ballet dancers. But, of course, ingestion of male hormones, a not entirely unknown practice amongst sportspeople, turns off the secretion of pituitary trophins, leading to testicular shrinkage. Such a practice may be as strenuously denied as it is indulged.3 Of course, simple inspection, questioning and testing of bodybuilders could produce the answers. In the meantime, the reports that, despite their small balls, some bodybuilders have a libido which matches their immense body mass, clearly distinguishes between the two mechanisms, in them at any rate. Regardless of the uncertainties about an endogenous or exogenous mechanism, it is difficult to escape the conclusion that bodybuilders develop small balls, and, as they well know, small is not always beautiful. But if there is to be a government warning, where should it be pinned?

I wish to thank my wife for forbearance and the police for tolerance.

Note [Editor’s note: In case of puzzlement, some readers may wish to substitute the word “crotch” for each instance above of “crutch.”]

This article is republished with permission from the January-February 2006 issue of the Annals of Improbable Research. You can download or purchase back issues of the magazine, or subscribe to receive future issues. Or get a subscription for someone as a gift! Visit their website for more research that makes people LAUGH and then THINK.

This article is full of flab, word-wise -- did the author mention STEROIDS and their side-effects...like reduced size of testicles?
Abusive comment hidden. (Show it anyway.)
Upon further review I would like to say:

Miss C.: If you want anyone to take you seriously in the future, stop posting fake articles.

Neatorama: If you want anyone to take you seriously in the future, you should double check anything Miss C. posts.
Abusive comment hidden. (Show it anyway.)
This article is either:

Fake/ a joke
or
the "Emeritus Professor Sam Shuster" is a closeted gay man.
No other possibilities
Abusive comment hidden. (Show it anyway.)
This whole "Improbable Research" thing is getting way out of hand.

Even when it's obviously tongue-in-cheek, it's tiresome. This one had a few people fooled, and it's not really all that funny. Steroids shrink things - we know that.