The 1984 film Ghostbusters starred Harold Ramis, Bill Murray, and Dan Akroyd as paranormal exterminators in New York City (later joined by Ernie Hudson). The script was written by Ramis and Akroyd. The movie was #1 for five weeks straight that summer, and became the most successful comedy of the 1980s. But you already knew all that, didn't you? Here are ten things you might not know about Ghostbusters. 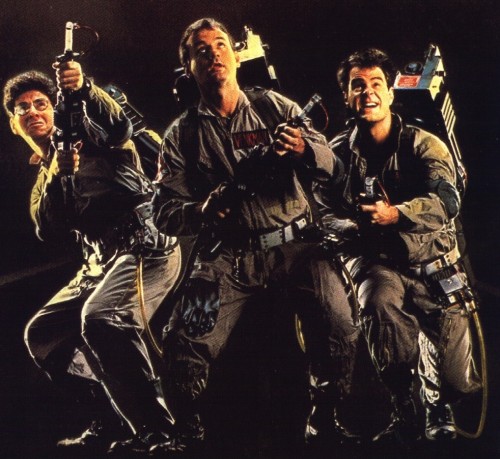 1. The story as Dan Akroyd originally envisioned it involved time travel and many more ghostbusters. He wrote the principle roles for John Belushi, Eddie Murphy, and John Candy. Belushi died before the movie was made, and Candy and Murphy weren't interested. Harold Ramis changed most of the original plot to make the production affordable.

2. The film had no name through most of its development. One name that was considered was Ghoststoppers. After the producers settled on Ghostbusters, plans went ahead. Some time later, it was brought to their attention that a live action children's show named The Ghost Busters had aired during the 1975-76 TV season. Columbia quickly pursued negotiations with Filmation, the owners of the series, to secure rights to the title they were already using. After the movie became a hit, Filmation went back and produced an animated series called Filmation's Ghostbbusters, using the same characters from the earlier live-action series. A separate animated series from Columbia Pictures called The Real Ghostbusters based on the movie began in 1986.

3. The voice of the gatekeeper Zuul, the minion of Gozer, was that of Ivan Reitman, the film's director, but he didn't take a credit for it. Just another trick at a producer's disposal for saving money -one more voiceover artist they didn't have to pay!

4. The Proton Pack is the weapon of choice for the Ghostbusters. It is sort of a particle-beam weapon. We have some of those in real-life now, such as the Large Hadron Collider and other particle-acceleration laboratories, but you can't carry something like that on your back. Columbia Pictures had the Proton Packs made by the prop department out of fiberglass with various gizmos added like pneumatic fittings, resistors, and anything else lying around that might look appropriate. 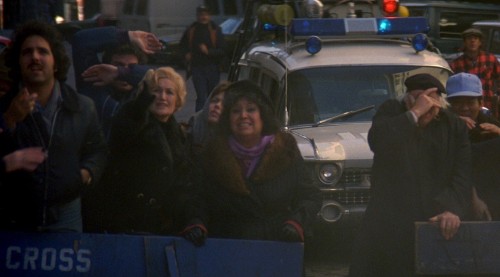 5. Adult film star Ron Jeremy appeared in a the crowd as the containment unit explodes. The scene is about an hour into the movie, and Jeremy is to the left, sporting his iconic mustache.

7. The spirit/diety Gozer takes the form of the Stay Puft Marshmallow Man because Dr. Raymond Stantz (Akroyd) thought of him as someone who would never hurt him. Stay Puft is a fictional company. The Marshmallow Man was only one of many oversized monsters in the original script -the rest were cut due to budget concerns. 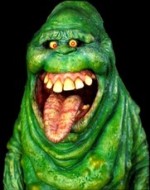 8. The voracious green ghost that passes through walls and leaves slime behind is known as Slimer, although he was never referred to by name in the first Ghostbusters movie. Instead, the cast and crew called him "Onion Head"! Oh yes, the voice of the-ghost-to-be-later-known-as Slimer was also director Ivan Reitman.

9. "Who you gonna call?" The theme song "Ghostbusters" by Ray Parker, Jr. went to #1 on the Billboard singles chart and stayed there for three weeks. It was nominated for an Academy Award in the best original song category, and won a Grammy. But you won't find the music video on the home video version of the movie Ghostbusters, due to a plagiarism suit brought by Huey Lewis in 1984. Lewis charged that the tune to "Ghostbusters" was essentially the same as "I Want a New Drug" by Huey Lewis and the News, which came out six months earlier. The suit was settled out of court in 1985, with one of the stipulations being that neither party would ever discuss the suit in public. Believe it or not, Huey Lewis was asked to come up with a theme song for Ghostbusters, but turned down the project, after which the producers approached Ray Parker, Jr.

10. Ghostbusters III has been in discussion for years. Dan Akroyd had a script ready long ago. Producer Ivan Reitman says the movie will begin filming this fall for a 2012 release. The principle characters will be played by younger actors, although the original cast may appear as well. Bill Murray is not interested in participating.

Ghostbusters Stuff From the NeatoShop:

I found the posters list even more interesting. Thanks
Abusive comment hidden. (Show it anyway.)
Just a thought about;
Mat MacQuarrie
Jul 21st, 2010 at 9:26 am
Bahhhhh, the Huey Lewis song is somewhat similar. But if I were to hear it on the radio I would never have compared the two songs.

When the two songs in question were on the radio all the time, and my friends and I would be out crusin', it was common for us to sing along with whatever was playing. In this case it NEVER failed that when the intro of one of the songs would start, some would sing the right song while others would sing the wrong one. This happened no matter which song would start first!

I remember when this thing went to court, it was revealed that Huey Lewis had been originally asked to write the theme, (he was the most popular singer at the time) but he declined. Ray Parker Jr. ,who was working in the same recording studio as Huey Lewis at the time, was then asked if he could write the theme, and if he could make it sound "like a Huey Lewis song". Ray Parker was walking down the hall, past Huey Lewis recording, a few times a day. "I want a new drug" was being recorded at the time! I don't think Ray Parker was copying the song, but was a victim of "Subconscious Plagerism" Has happened to the best!
Abusive comment hidden. (Show it anyway.)
another fact:

Nearly all of Bill Murray's dialogue is ad libbed.