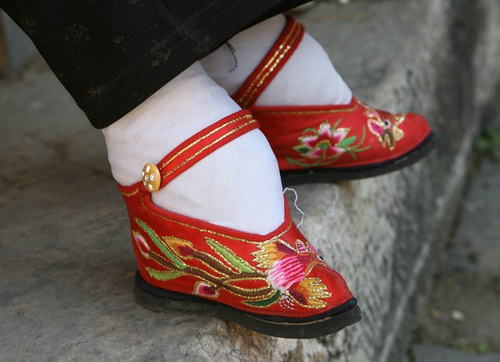 There is an argument over where the story of Cinderella came from, China, Egypt, or Greece. But the ancient tale of Ye Xian contains a rather creepy clue that the story originated in the land of the original foot fetish. In the Chinese version, the king never even meets our heroine at the ball -he becomes obsessed with finding her solely because of the miniscule size of the shoe she left behind. This makes sense in light of the traditional practice of foot binding. It is estimated that somewhere between a billion and four billion women in China had bound feet between the 10th and 20th centuries. 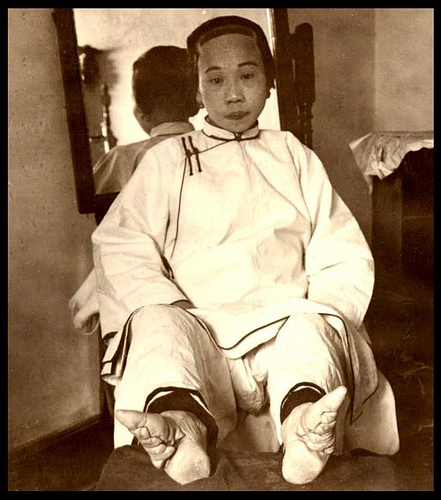 Foot binding began in the late T'ang dynasty and lasted for about a thousand years, until the 20th century when the practice was outlawed. Why it ever started is the stuff of legends. Some say the public wanted to emulate a Emperor's favored concubine who had unusually small feet. Others tell of an Empress with club feet and followers who bound their feet in sympathy. There are even tales of an Emperor who ordered his female subjects to undergo the procedure. Whatever the reason for the first foot to be bound, the custom caught on. The reason most often given is that small feet were sexually alluring. Now, anything can be sexually alluring if you are told that it is. Why would crippled, deformed feet make a woman more attractive? The underlying reason is that a woman with bound feet is a status symbol, an indicator of wealth and social standing. Only a man of considerable means could afford to have a wife, concubine, or daughters who couldn't work. 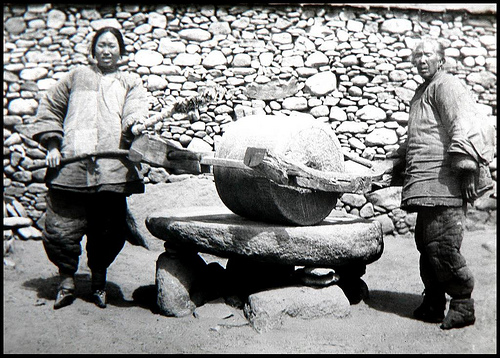 The problem with status symbols is that even people without status crave them. In reality, most women in China had to work, whether their feet were bound or not. With their feet mangled in this manner, women were essentially going through life balancing on their heels. As the practice spread from the upper classes to the rest of the population, the only groups that did not bind a daughter's feet were the Manchus (who still developed a shoe style to imitate the Chinese "lotus walk"), a few ethnic minorities, and some of the women who worked in southern rice paddies. Even poor families doomed their girls to a life of pain, in hopes that she would be able to marry up. 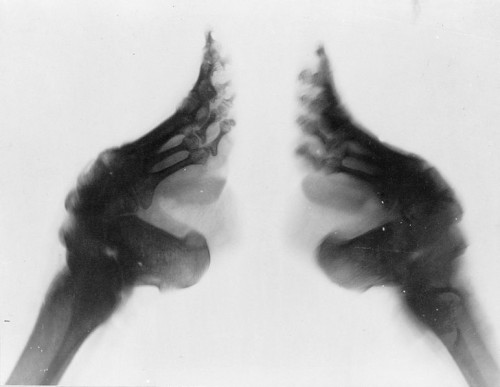 Beginning at the age of five or six (sometimes older, sometimes younger), a girl's toes would be bent back under the foot and wrapped tightly. The wrappings would stay on as the child's foot grew, and the bones buckled under the pressure. If the foot had grown too much before the first binding, the bones of the foot had to be broken first. The result was often a high, deformed arch, and toes that were only a scant two or three inches from the heel. This was the goal, a three-inch-maximum foot called the Golden Lotus. 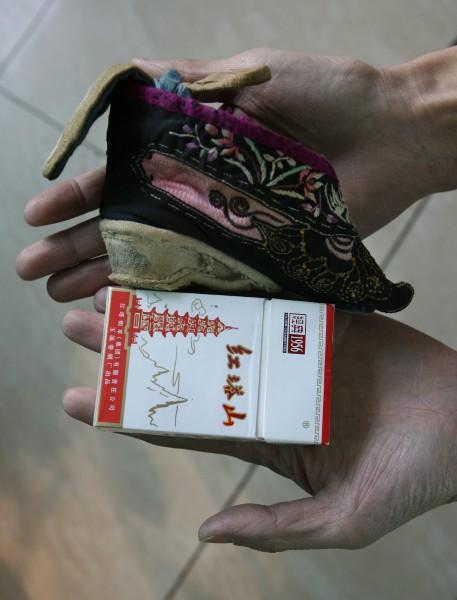 Special shoes had to be constructed to fit and accentuate tiny lotus feet. A young woman would sew and embroider at least a dozen pairs of shoes for her wedding trousseau. Many a potential mother-in-law would inspect these shoes, both to see how small they were and to see how fine the handiwork was. There were intricately-detailed shoes for all occasions, including shoes to sleep in. After all, those tiny deformed feet were kept under wraps almost all the time, which added to their mystery. If they had been exposed, the custom may have died out much earlier. Besides the deformity itself, bound feet were often infected, and pieces of dead and decaying flesh had to be trimmed off. Blood and pus had to be cleaned up. Many women insisted on complete privacy when caring for their feet. 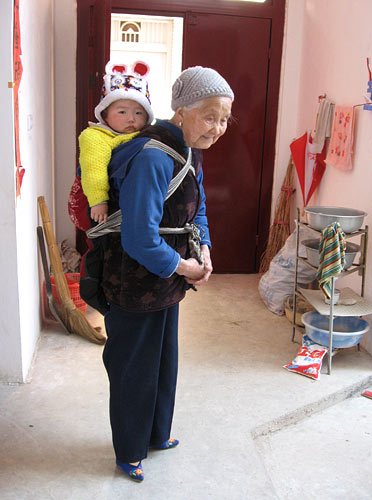 Foot binding was formally outlawed in China in 1912. Even then, families were reluctant to discontinue binding their daughters' feet, lest they hurt their chances for a good marriage. In reality, the practice continued in some areas for decades afterward. These last girls who had their feet bound in the 20th century are now elderly and some are willing to talk about their experiences.

Liuyicun resident Wang Lifen, 79, describes her own attitude as a child, saying, "I didn't want to bind my feet, but the whole village told me that I had to. So I did." And 86-year-old Zhou Guizhen says, "At that time everybody had bound feet. If you didn't, you'd only be able to marry a tribesman from an ethnic minority." These women disfigured their feet to guarantee their own future, but according to Yang Yang, this act ultimately consigned them to tragic lives. Most of Liuyicun's bound-feet women were forced to perform hard physical labor in the late 1950s, digging reservoirs, for example — work which was punishing enough for ordinary women, but agonizing for those with tiny, misshapen feet. 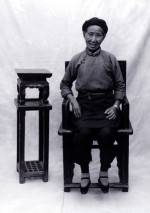 The Communist Revolution in 1949 was the official death blow to the custom of binding feet. Women who had lived almost their entire lives with bound feet were ordered to unbind them, a procedure which itself caused problems, as Liu Yue-xin explains in her story at the Bound Feet Project.

I've been binding since I was eight or nine years old. I don't bind tightly anymore, so my feet have expanded some compared to how they used to be. I bind now because the bones in my feet are already broken and without the wrappings I'd have no support. I couldn't walk if I didn't bind - besides, I'm used to it - I've been doing it for at least 65 years! It just feels more comfortable this way. Many younger women let their feet out in the 1940s when the government was encouraging it strongly. They told us it was inconvenient and we shouldn't do it anymore. But if you were in your thirties or older and had been binding for years already, you just couldn't even consider doing it. It would have been even more inconvenient to let them out! Nowadays there is no advantage to having bound feet, but when I was young we did it so we would be beautiful. My mother told me that the smaller one's feet, the better, and that I had to bind so that when I reached marriage age it would be easy to find a husband. People felt that only women with small feet were attractive. But now I think the big feet girls have today are pretty, too.

Read many more personal stories of women with bound feet at the Bound Feet Project. If you would like a closer look at the result of foot binding, be warned that this vintage photo of a bound foot without a shoe may be disturbing. It is part of a Flickr set of foot binding pictures. Most of the remaining women with bound feet have relatively moderate deformities compared to those of a century earlier, as the practice of foot binding became more clandestine after the 1912 ban. That meant many of these women were older when the binding started. Also, those who unbound their feet under communist rule often saw the length of their feet grow over time. Within a decade or two, the last living examples of foot binding will be gone, and all that will remain are the tiny lotus shoes.

ZO..
I just finished that book. It was very good and oh, I felt the pain those little girls must have gone thru.
How sad.
Abusive comment hidden. (Show it anyway.)
we-e-e-e-e--e-eird!
Abusive comment hidden. (Show it anyway.)
Thanks for such an interesting and informative article (and links)! This is now going to be my one stop for foot binding when I teach it to my 10th grade world history classes (I've previously had to Google and hope for something worth while.)
Abusive comment hidden. (Show it anyway.)
This has nothing to do with foot binding except that it involves small feet. I once visited the Chinese theatre with a friend of mine and was shocked at the tiny tiny shoe prints of the some of the women who had left their impression there. I've always had "small" feet compared to the other women in my family, so it was pretty amazing the imprints of shoes I could have worn when I was eight years old.

Although, I'm guessing that should they have been born in that time and place, they would have still be subject to binding themselves. When you're striving for the smallest, the least, the youngest... there's only one way to go.
Abusive comment hidden. (Show it anyway.)
Read "Snow Flower and the Secret Fan" about a girl in these times who had the procedure done and about the customs from back then. It's fiction and one of my favorite books!
Abusive comment hidden. (Show it anyway.)
Login to comment.