If you missed out on the San Diego Comic Con this year, you weren't alone -tickets sold out months in advance, leaving a whole lot of people locked out. If you were one of the many who wanted to go and couldn't, or if you just are interested in the event, now's your chance to see one of the best parts of the con -the costumes. These pictures include my top 20 favorite costumes, but there are a whole lot more out there. If you're interested in seeing more convention pictures, be sure to use the links at the bottom of the article. There's always a lot of cross-over costumes at Comic Con and for some reason, they tend to mostly involve Star Wars. These guys were seventies Darth and Boba Fett. I missed out on the opportunity of getting a picture of another one along these lines, the storm troopper with a gold, disco-ball tiled helmet. 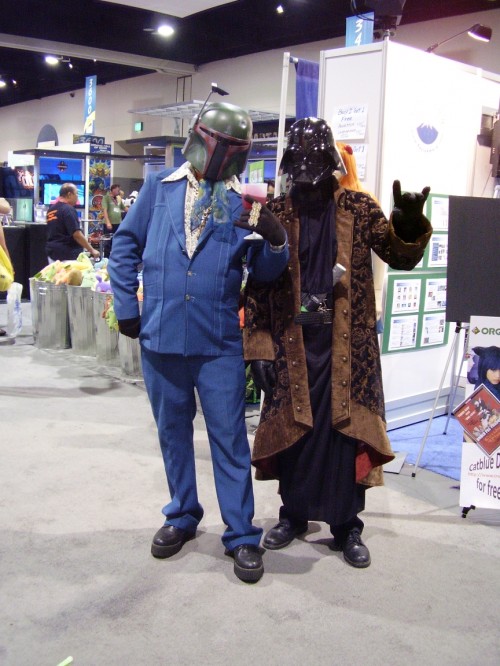 Here's another great Star Wars cross-over costume. While Chef Vader is good, it wouldn't have been half as good without the addition of Jar Jar's head on a platter. 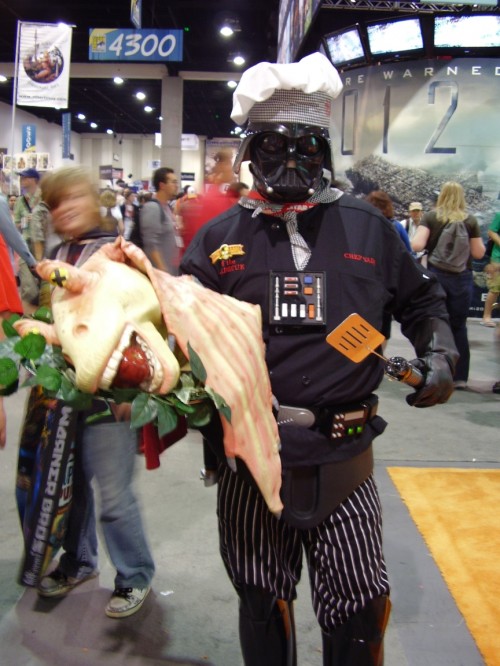 For some reason, it always seems even cooler when the costumed character is an older person. Here's a perfect example, and yet another Star Wars cross-over costume, this time a Jedi Holmes. 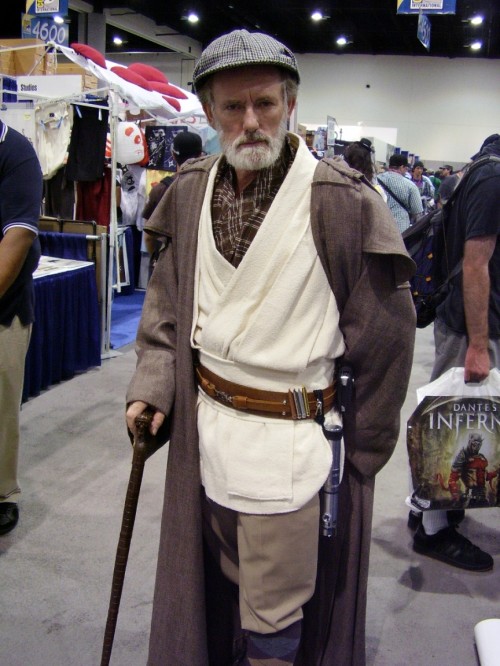 Of course, Boba Fett wanted me to remind you that there are plenty of classic Star Wars costumes as well. 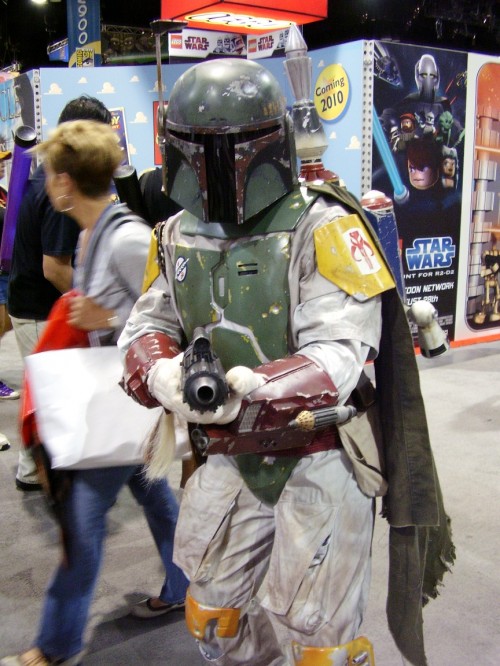 Contrary to popular belief, there are actually a whole lot of very hot women at comic con. These evil cheerleaders are only the tip of the iceberg. 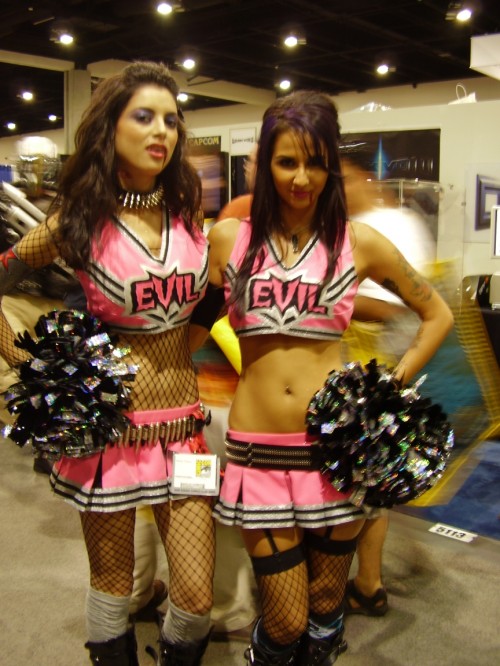 Here's further proof that there are some major hotties at the con. This tailed pirate may not make sense, but I didn't hear too many complaints. 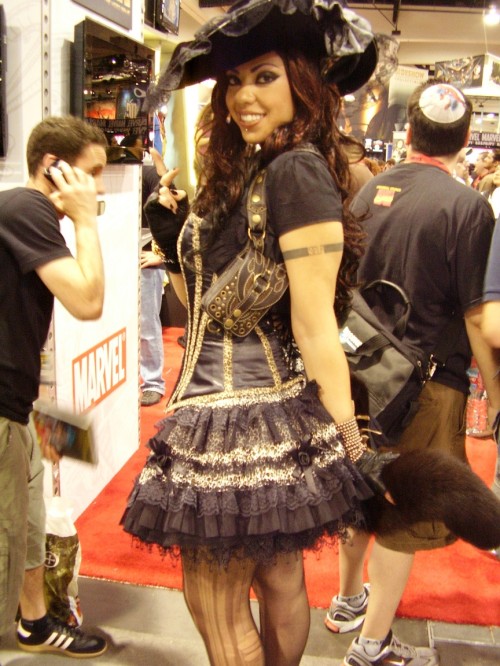 This couple is here every year dressed in Alice In Wonderland gear. Next year though, there will undoubtedly be an increase in these costumes due to the upcoming Tim Burton film. 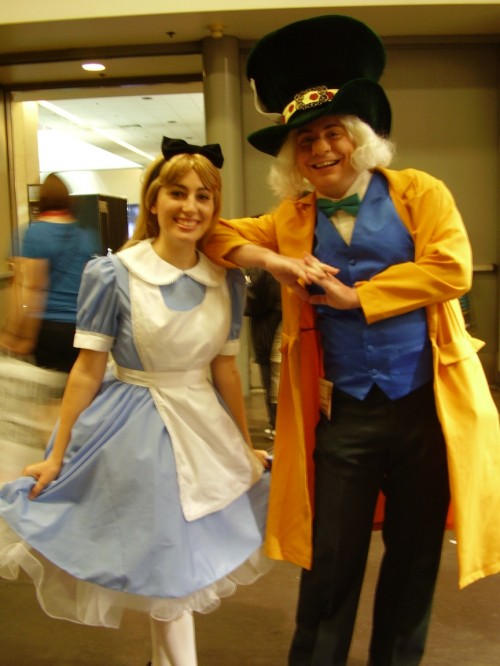 This young girl designed and created this fantastic dress, which had already won her a masquerading award at an anime convention.

These gentlemen showed up to represent one of the greatest things that ever came out of Mad Magazine, Spy Vs. Spy. 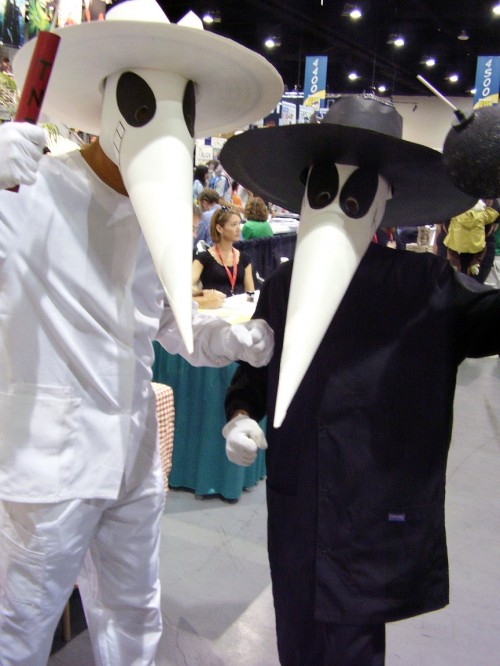 There were a whole lot of Watchmen costumes this year, as it was one of the most recent and popular comic book movies before the convention. I think this Rorschach was one of the best at the event. 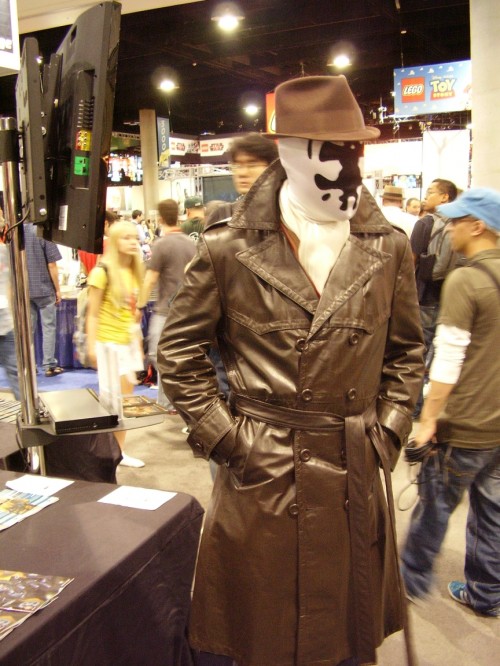 If you don't recognize this guy, you won't be alone. He's dressed up to help promote his booth. A lot of people do this to get attention for their small-press comics. Another popular approach is hiring a "booth babe." 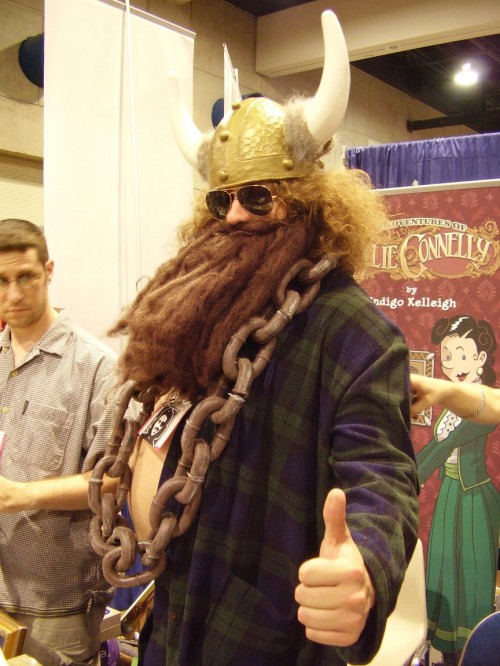 Speaking of using costumes and babes to get attention for a booth, here's one combining the two. What a cute costume, what a sexy girl...you can bet they had a lot of traffic at their booth. 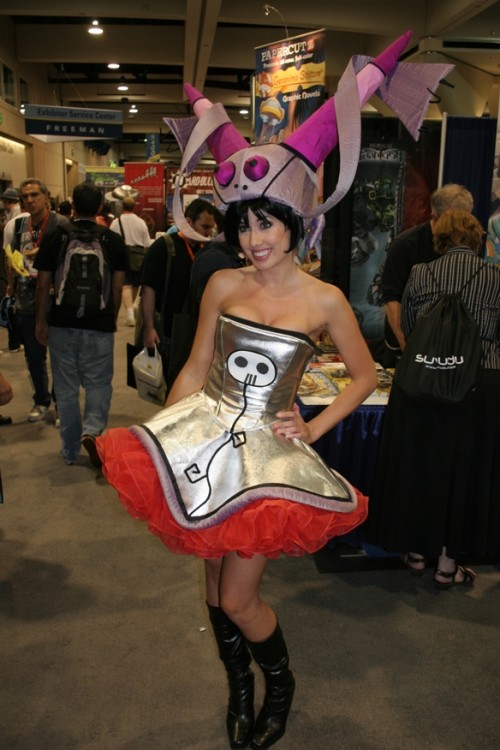 Here's a more classic booth babe. While she's still in costume, it isn't anything nearly as off-the-wall as the cutie above. Still, I'd say she got her message across. 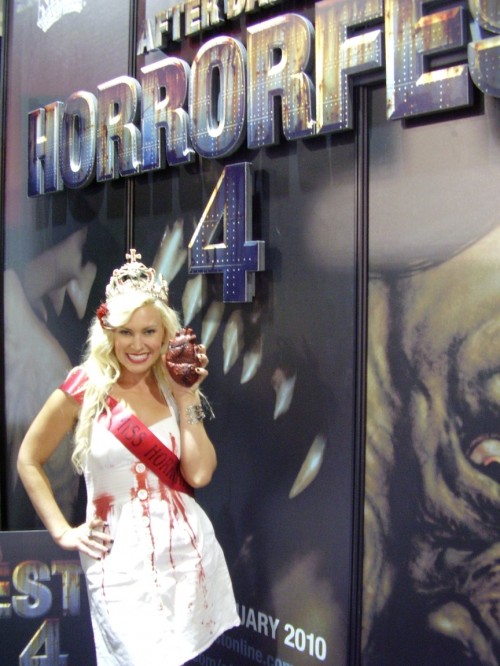 Couple's costumes are always popular at the convention. Here's a great pair of X Men, for example. 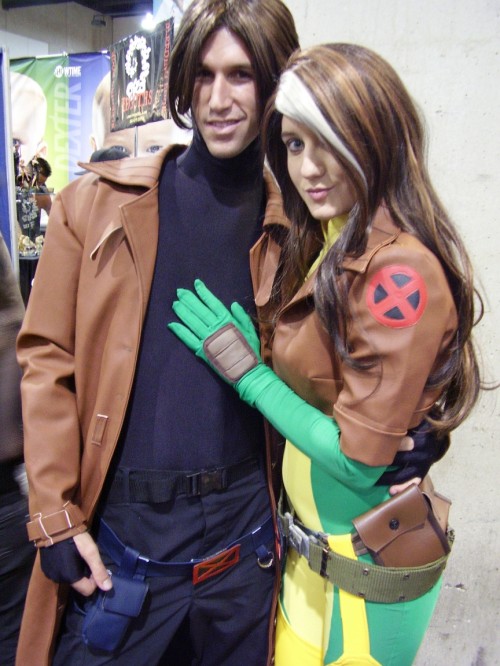 Ghostbusters always have a big presence at the convention, partially because once you make a huge proton pack, you aren't going to scrap it in the following years. 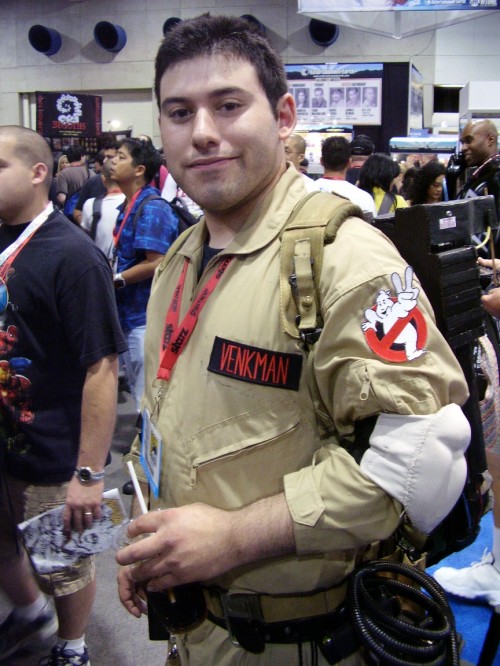 This costume is actually a major rarity. While there are many Disney costumes every year, there's rarely a woman dressed up as anything besides Alice or a Disney princess. I'm a big fan of the fairies in Sleeping Beauty, so this getup was one of my favorites. 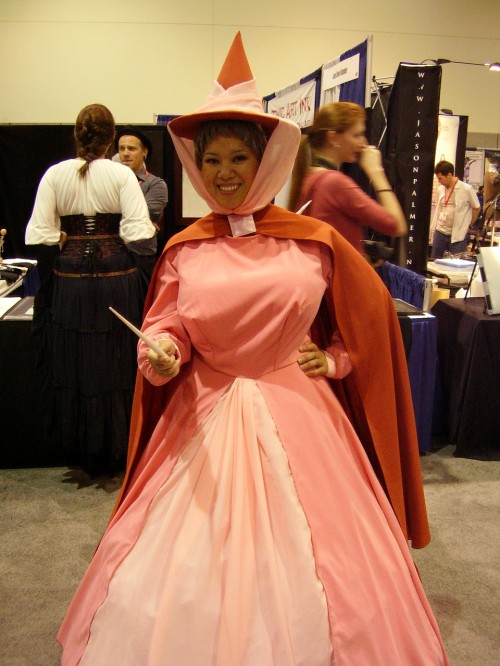 If you're a big fan of the male Disney characters, you'd likely enjoy this Jack Sparrow, who not only looked the part, but played it well. You may have a problem with his drinking Full Throttle while in costume, but just try and convince me that a real Jack Sparrow wouldn't be downing this stuff like crazy if he had it. 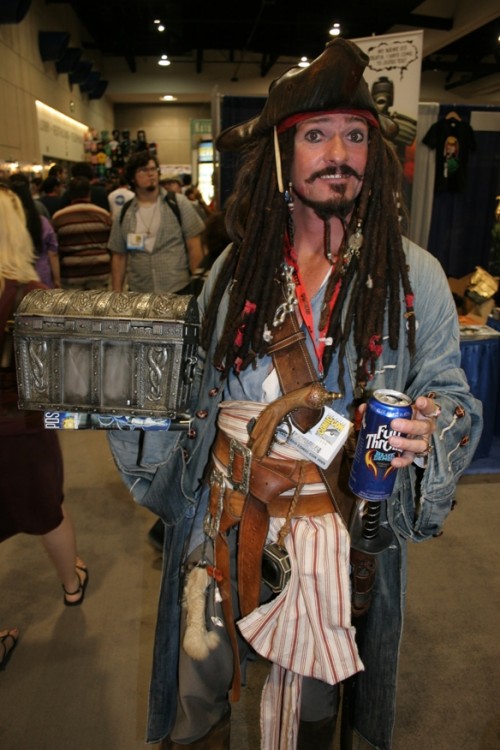 Cobra Commander is always a hip choice, but he may be overdone next year after the new GI Joe movie comes out. Personally, I always am reminded of the Cobra Commander for president campaigns when I see these guys. 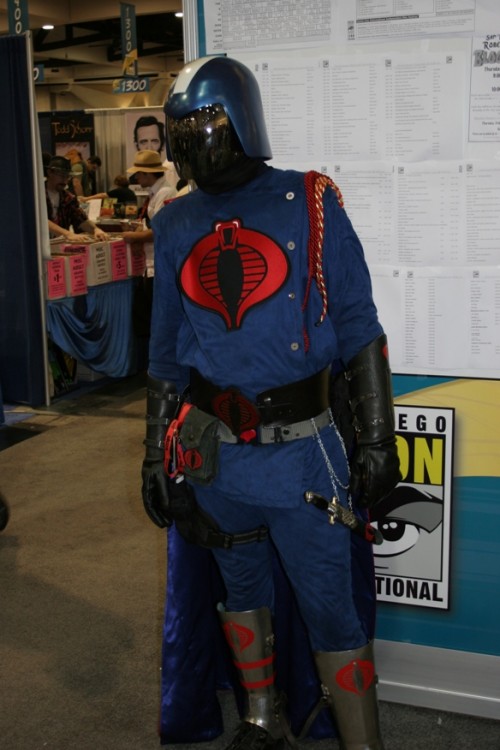 Lastly, not all women dressed up at Comic Con have to dress sexy and here's a perfect example of a cute and sweet Harlequin costume. They're another popular one every year. 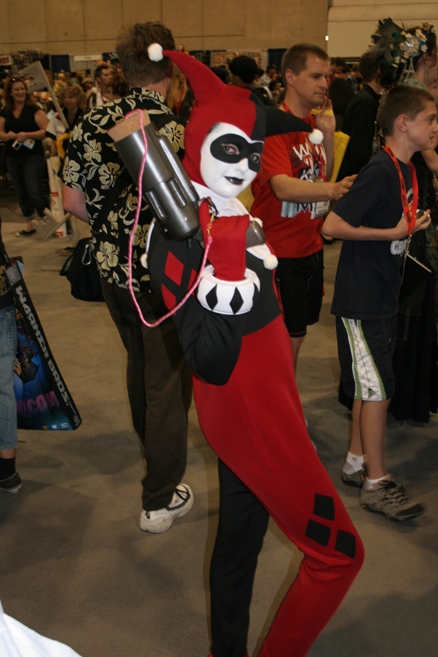 Lastly, as promised, here are a few links for other Comic Con galleries: For a few great costume galleries, here's one on Geeks Are Sexy and my other pics this year.and for 2008, here's one by Rue The Day and one on the Official Star Wars Blog. There's even a few great Flickr sets of 2008 and 2007 costumes. As far as merch goes, here's a great post on things available there at Boing Boing Gadgets, one for the giant Stitch vinyl toys on display, and one for general stuff seen at the con. And one for things last year. Lastly, if you just want to see some more cute girls at Comic Con, there's one for that too.