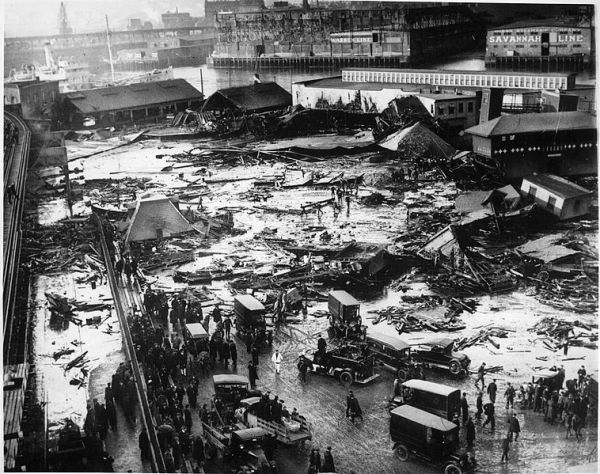 Photo of the aftermath of the Great Boston Molasses Flood [wiki]

You'd be hard-pressed to find a more innocuous substance in your kitchen than molasses. Who would ever suspect that this thick, dark, and homey sweetener could also be a terrifying, fast-moving killer?

Newspaper accounts report that January 15, 1919 - the day of the Great Molasses Flood of Boston, Massachusetts - began like any other winter day in that city, except for one thing. The weather was unusually warm, reaching 40°F by midmorning. This was probably a welcome event for Bostonians, who had suffered through rigid 2°F temperatures the day before. But little did anyone guess what havoc this extreme temperature swing would soon wreak.

The sudden rise in temperature compromised the structural integrity of a 50-foot-tall steel tank filled with 2,320,000 gallons of molasses. Owned and maintained by the U.S. Alcohol Company, the tank had been filled to capacity in order to make as much hooch as possible before the alcohol prohibition law kicked in. Just after noon on the 15th, the lunchtime crowd in the vicinity of the tank (located on the waterfront in Boston's densely populated North End) heard a thunderous explosion, immediately followed by what must have been the weirdest thing they had ever seen in their lives: a 25-foot-high wall of syrup washing toward them through the streets at 30 miles per hour. For 21 of these unfortunate witnesses, it would be the last thing they would ever see. Some were engulfed and smothered in the dark goo like pre-historic insect trapped in amber. Others were killed when the molasses ripped buildings from their foundations, or simply reduced them to rubble. Another 150 people were injured.

The New York Times of January 16, 1919, reported that a section of the tank wall fell on a nearby firehouse, crushing the building and three firemen inside. Freight cars were smashed; a warehouse yard was leveled. Horses became hopelessly mired in the goo and were shot. Rescue teams had a difficult time slogging through the thick syrup, which rose several feet high throughout the neighborhood.

Because the molasses stuck to everything it touched, the cleanup took several years and millions of dollars. Even so, residents reported that molasses would seep up from the ground on hot days as many as 30 years afer the flood. And to this day, sharp-nosed Bostonians swear that they can smell the stuff when the temperature rises. 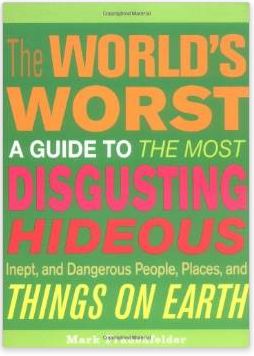 The article above was taken from The World's Worst: A Guide to the Most Disgusting, Hideous, Inept, and Dangerous People, Places, and Things on Earth by Mark Frauenfelder, the co-founder of the popular blog Boing Boing.

In the introduction to his book, Mark wrote that "Bookstore shelves are lined with volumes dedicated to the finest things in the world: the most exquisite dining experiences, the greatest athletes ... While it's good and proper to bestow honor upon those individuals and items that shine at the top of the heap, the truth is that the really entertaining stuff is taking plce well below." And how true that is: The World's Worst is one of the most entertaining books I've read in a long while!

Get it here: http://www.amazon.com/Worlds-Worst-Disgusting-Hideous-Dangerous/dp/B000EMSZ3I - Thanks Mark!

Janice, Peter Francis was my great great grandfather. My mother's maiden name is Denise Francis from Lynn. I guess we are related. We are writing a story on the topic for my son's 3rd grade class about family history. Let me know if have any other details. Maybe we should start a group; "sons and daughters of the great molasses flood", a slightly more dubious title than the "daughters of the Mayflower."

Kevin Richard
Cambridge
krun5k@gmail.com
Abusive comment hidden. (Show it anyway.)
i would like to let you know that my uncle peter francis a blacksmith at the north end paving yard was one of the people who died in this explosion. even though this happened before i was born my mother before she died told me about it.
Abusive comment hidden. (Show it anyway.)
Why didn't someone make pancakes? Or waffles? Or toffee? or Drop Cookies? So sad
So many wasted opportunities for capitalistic gain. They could have put it into ice cube trays, providing someone had invented ice cube trays, and stuck sticks into each cube and invented the Boston Pops. Wonder why little Artie Fielder didn't think of that?

They could have sold it to Miss Fannie May and she could have created the Walnetto and then the FM Turtle with just some chocolate and a few nuts like me.

They could have saved some for Bush and Cheney, and with some feathers given them a ride on the Rail Road, splinters and all, that they deserved.