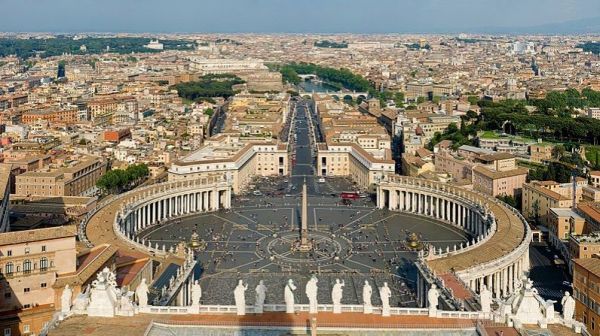 The size of a golf course, the Vatican City [wiki | official website] is the smallest country in the world. It's basically a walled enclave inside of Rome, Italy. It's so small that the entire country does not have a single street address.

The Vatican City may be small, but it is very powerful. It is the sovereign territory of the Holy See, or the seat of the Catholic Church (basically its central government), which has over 1 billion people (about 1 in 6 people on the planet) as constituents.

The Vatican City was created in 1929 by the Lateran Treaty (which was signed by one of history's most repressive dictators, Benito Mussolini) and is ruled by the Pope, basically a non-hereditary, elected monarch who rules with absolute authority (he's the legislative, executive and judiciary all rolled into one) - indeed, the Pope is the only absolute monarch in Europe.

Another unique thing about the smallest country in the world is that it has no permanent citizens. Citizenship of the Vatican City is conferred upon those who work at the Vatican (as well as their spouses and children) and is revoked when they stop working there. 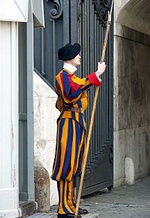 The Vatican City is guarded by the smallest and oldest regular army in the world, the Swiss Guard [wiki]. It was originally made up of Swiss mercenaries in 1506, now the army (also personal bodyguards of the Pope) number 100, all of which are Catholic unmarried male Swiss citizens. The Swiss Guard's Renaissance-style uniform was commonly attributed as to have been designed by Michelangelo - this was actually incorrect: the large "skirt" pants were a common style during the Renaissance. Only their uniforms seem antiquated: most of the Swiss Guards carry pistols and submachine-guns. (Image: Dnalor_01/Wikimedia Commons/CC-BY-SA 3.0)

The official languages of the Vatican City are Latin and Italian. In fact, its ATMs are the only ones in the world that offer services in Latin! And here you thought that Latin is a dead language...

For a country that has no street address, the Vatican City has a very efficient post office: an international mail dropped in the Vatican will get there faster than one dropped in Italy just a few hundred yard away - in fact, there is more mail sent annually per inhabitant from this country (7,200 mails per person) than anywhere else in the world.

The Vatican City has a country code top level domain of .va - currently there are only 9 publicly known .va domains [wiki]. It also has a radio broadcasting service, called Vatican Radio [wiki], which was set up by Guglielmo Marconi (the Father of Radio) himself!

The country's economy is unique: it is the only non-commercial economy in the world. Instead, the Vatican City is supported financially by contributions of Catholics worldwide (called Peter's Pence - hey, even the Pope accepts credit cards!), the sale of postage stamps and publications, and tourism.

Lastly, as an ecclesiastical paradise, the Vatican City has no taxes.

Monaco [wiki | official website] is the second smallest country on Earth (it's roughly the size of New York's Central Park), yet it's the most densely populated (23,660 people per km²). Actually, Monaco used to be much smaller than it is now - about 100 acres were reclaimed from the sea and added to its land size. At the narrowest, Monaco is only 382 yards wide!

The Principality of Monaco, its formal name, means that the territory is ruled by a prince. For the last seven centuries, Monaco was ruled by princes of the Grimaldi family from Genoa. (The whole thing started one night in 1297 when François Grimaldi disguised himself as a monk and led a small army to conquer the fortress guarding the Rock of Monaco. The coat of arms of the Grimaldi bears the image of monks with swords!) Now, the Prince shares legislative authority with a National Council.

In 1861, Monaco relinquished half of its territory to France in exchange for cash and independence. When the reigning prince realized that most of Monaco's natural resources were on the land that got bartered away, he decided to bet the whole economy on ... what else, gambling (see, casinos aren't only for American Indians, it's a time-tested, universal solution!)

And so began Monte Carlo [wiki], a region of Monaco well known for its glamorous casinos (a setting for Ian Fleming's first James Bond Novel Casino Royale [wiki]) and its Formula One Grand Prix. 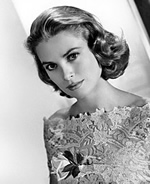 In 1918, Monaco entered a treaty with France for military protection - the treaty, however, also stipulated that Monaco would lose its independence (and become French) should the reigning Grimaldi prince died without leaving a male heir! When Prince Rainier III took over, he was a bachelor and most Monegasques (that means people of Monaco) were gloomy about the country's future. However, he ended up marrying Hollywood actress Grace Kelly [wiki] - the marriage not only produced a male heir, it also helped burnish Monaco's image as a glamorous place to be for the wealthy. (Monaco can rest easy now, a new treaty with France stated that the Principality will remain independent even without a male heir). (Image: Wikipedia)

For a long time, Monaco had no income taxes and was a tax haven for wealthy foreigners and international corporations. This caused a unique thing about Monaco's population: most of its residents are not native - in fact, only about 1 in 5 people are native Monegasques. After a long dispute with France, Monaco started to impose income taxes on all of its residents who are not born there. Its natural citizens are forbidden from entering casinos, but to make up for it, they do not have to pay any income taxes. 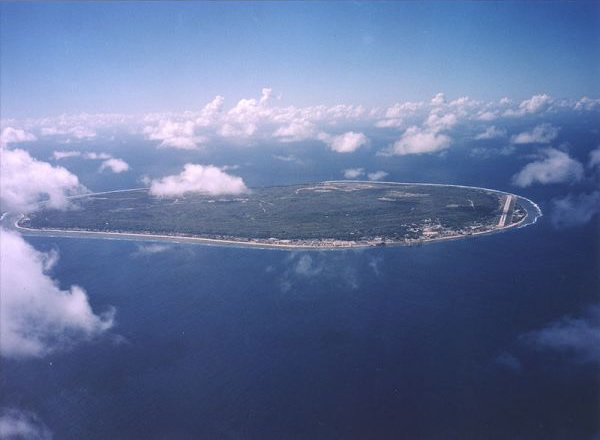 Nauru [wiki] is the world's smallest island nation, the smallest independent republic, and the only republic in the world without an official capital.

Nauru only has one significant source of income: phosphates from thousands of years' worth of guano or bird droppings. This proved to be both a boon and a bane for Nauruans - for a long time, its residents enjoyed a relatively high level of income as the country exported its phosphate like there's no tomorrow.

The government employed 95% of Nauruans, and lavished free medical care and schooling for its citizens. Most didn't take advantage of this offer: only one-third of children went on to secondary school. The adults didn't really work, either - office hours were flexible and the most popular pastime was drinking beer and driving the 20-minute circuit around the island. For a while, Nauru was a paradise - for a brief moment in 1970s, Nauruans were even amongst the richest people on the planet.

Nothing lasts forever and sure enough, Nauru's phosphate reserves soon dried up and left 90% of the island as a barren, jagged mining wasteland. Wasteful investments (like buying hotels only to leave them to rot) and gross incompetence by the government (former presidents used to commandeer Air Nauru's planes for holidays, leaving paying customers stranded on the tarmac!) didn't help either.

As if that's not bad enough, Nauru is also beset by obesity problem. Decades of leisurely lifestyle and high consumption of alcohol and fatty foods have left as many as 9 out of 10 people overweight! Nauru also has the world's highest level of type 2 diabetes - over 40% of its population is affected.

So now, Nauruans are poverty-stricken and fat - but they are trying to turn things around. With no natural resource left, in the 1990s, Nauru decided to become a tax haven and offered passports to foreign nationals for a fee. This attracted the wrong kind of money (but a lot of it): the Russian mafia funneled over $70 billion to the tiny island nation. Things got so bad that most big banks refused to handle transactions involving Nauru because of money laundering problems.

This led Nauru to another extraordinary money-making scheme: it became a detention camp for people applying for asylum to Australia! 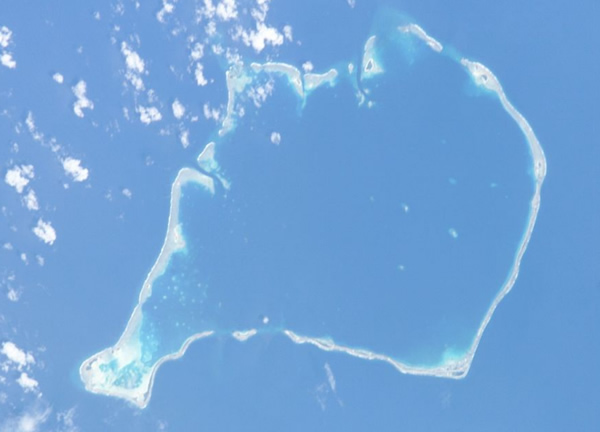 Tuvalu [wiki] is basically a chain of low-lying coral islands, with its highest elevation being 16 feet or 5 meters above seal level. With total land area of just 9 square miles, Tuvalu is not only a teeny tiny island in the Pacific Ocean, it may not even exist in the next 50 years if sea level continue to rise (a controversial claim, nonetheless there were evacuation plans to New Zealand and other Pacific Islands). Even if the sea level does not rise, other problems such as population growth and coastal erosion still make Tuvalu a very vulnerable country.

During World War II, thousands of American troops were stationed on the islands of Tuvalu and the island became an Allied base. Airfields were quickly constructed and after the war, abandoned. In fact, today rusting wrecks can be found on the islands, a constant reminder of its role in the War.

Today, Tuvalu also derives income from renting out its Internet country code top-level domain .tv, as it is the abbreviation of the word 'television'. This scheme got off to a rocky start (the original company who tried to do it failed to raise the necessary funds), but finally proved to be the largest source of income for the country. 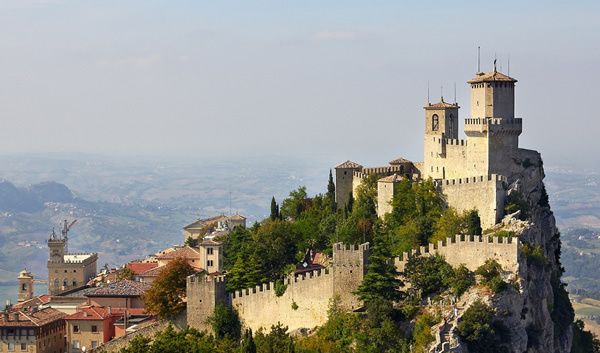 With the formal name of The Most Serene Republic of San Marino [wiki], it's not surprising that San Marino has got lots of charms. Founded in AD 301 by a Christian stonecutter named (what else) Marino (or Marinus, depending on who you ask), who along with a small group of Christians, was seeking escape from religious persecution, San Marino is the world's oldest republic.

Its history belies its simple motto: "Liberty." Indeed, San Marino was such a good neighbor that it was hardly ever conquered by larger enemies (it was briefly conquered in the 1500s and the 1700s, for like a month each). Even when Napoleon gobbled most of Europe, he left San Marino alone, saying it was a model republic!

San Marino takes its government seriously: for such a tiny country, San Marino has a very complex government structure, based on a constitution written in 1600. The country is ruled by an elected Council of 60, who appoints 2 captain regents (from opposing political parties, no less) to administer governmental affairs for six-month term. Talk about preserving liberties through division of authority!

Before World War II, San Marino was amongst the poorest countries in Europe. Today, with more than 3 million tourists visiting every year (half of San Marino's income is derived from tourism), the people of San Marino are amongst the world's richest people.

I have found an abandoned oil rig in the South Pacific...just East of Australia.