Poolbowl must be some kind of combination of billiards and bowling. All I know for sure is that Jason Belmonte and Florian "Venom" Kohler have a lot of time on their hands, and have used it to perfect some glorious tricks. So what if they have terabytes of outtakes, this compilation video is cool! -via Metafilter

Demi Bagby jumped onto the sand at Pacific Beach in San Diego and impressed everyone around her. Doing a handspring is pretty impressive, but she just goes on and on and on...  Bagby is quite an athlete, as you can see at her Instagram feed. -via Digg

Pro surfer Koa Smith caught a wave off Namibia's Skeleton Bay that took him for a nearly a mile! He surfed a single wave for a distance of 1.5 kilometers for two minutes that took him through eight barrels. It was captured on video, both from a drone and from Smith's own GoPro POV. Both videos are mesmerizing.

My whole day surfing I try to InVision that one dream wave that I want to experience. I picture it clearly. What it will look like. How it will feel. The emotions pouring out of me when the wave is complete. Then this happen :)

Brett Yang and Eddy Chen are a two-man group called TwoSet Violin. They aren't limited to violin music, as you can see from their performance of Pachelbel's Canon in D played on rubber chickens. I'm not sure that there wasn't some electronic magic going on here, since, while you can tuna fish, you can't tune a chicken. -via Metafilter

Escaramuza is a competitive sport performed by women riding sidesaddle in elaborate traditional dresses in homage to the Adelitas, the female soldiers who fought in the Mexican Revolution. It's a drill team event, part of charrería (Mexican rodeo) culture, judged on horsemanship and timing that come together in an impressive performance.

Because escaramuza costumes are based on historical uniforms worn during the revolution, there are strict guidelines for all costumes. Adelita dresses must be cotton or cotton-based, and always in traditional colors. Embroidered details must be sewn by hand, and accessories, like the pins the women wear near their necks, must be sterling silver and pinned in one particular place. Sombreros worn with both charra and Adelita costumes are also highly embellished, and secured by leather straps that sit on the chin just so. Dressing for a competition can take more than two hours.

Read more about escaramuza and see photographs of the riders and their costumes up close at Vogue. -via Everlasting Blort

This flip is obviously not impossible, because world class Australian skater Jackson Pilz did it before your very eyes, but it is a trick that skaters call "the Impossible." Physics Girl collaborated with Rodney Mullen, who is credited with creating the Impossible, to explain the physics of the trick. The Impossible flip is shown at five minutes in, but the background leading up to it is interesting, too.

Marching band geeks have a lot of fun in high school, but afterward, you realize that those skills aren't exactly in high demand in the outside world. You have to find some other way to make a living. Then that day comes, maybe years down the road, where you pull out your old skills to impress your co-workers. That happened to Officer Pennington of the Sacramento Police Department when the Kings' drum line approached, and suddenly a flashback caused his billy club to become a baton! Those years of practice weren't for naught after all.  -via TYWKIWDBI 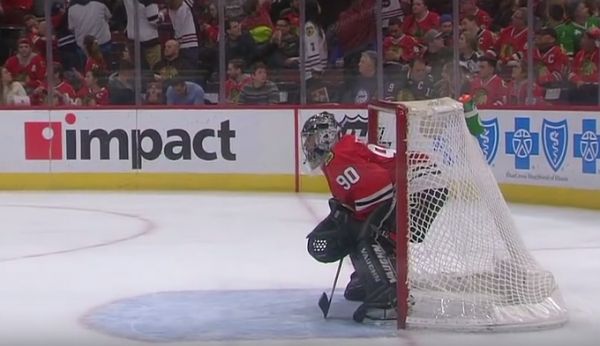 National Hockey League teams keep two goaltenders ready, plus an emergency backup goalie in case both of the pros become injured. The emergency goalie is often from a recreational league, and it's an honor for them to be selected to sit on the bench. They rarely get to play, and when they do, they aren't expected to shine. That wasn't the case for the Chicago Blackhawks last night.

“I am an accounting professional with experience in financial services. I have expertise in fund accounting and financial reporting.”

That’s the first sentence on the LinkedIn page of Scott Foster, a 36-year-old accountant (duh) who works in Chicago and played college hockey more than a decade ago. Tonight, he played his first competitive game since finishing his career at Western Michigan University in 2006—for the Chicago Blackhawks, who picked him up as their emergency goaltender today, and then found themselves actually having to play him in the third period of tonight’s game against the Jets.

Foster stole the show by blocking seven goals and preserving the Blackhawk's 6-2 lead over the Winnipeg Jets during the third period. It was a night he'll never forget. A good time was had by all.  -via Metafilter 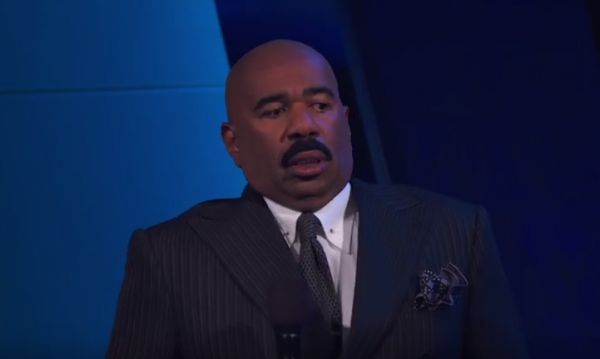 When you go to Showtime at the Apollo, you expect to hear some awesome music, and maybe see a dance routine or two. The audience wasn't prepared for Troy James.

The audience reaction is the really enjoyable part. Troy James is a noted Canadian contortionist who has appeared in several movies, usually as a monster or supernatural being, designed to freak people out. He's good at that! -via reddit 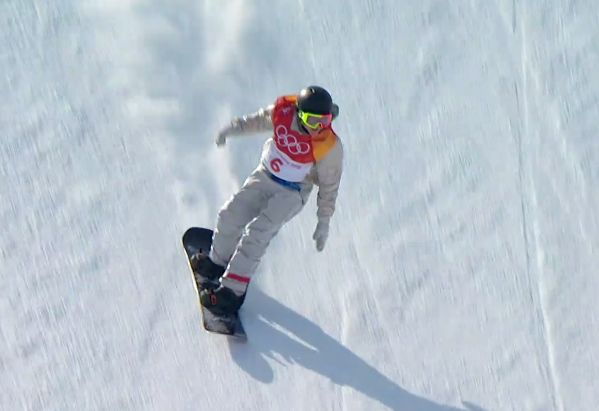 The first gold medal for the U.S. in the Pyeongchang Olympics has been won by a 17-year-old in an event you probably haven't seen before. Red Gerard came from last place to gold in his final run in the snowboard slopestyle event. He is the first American born in the 21st century to win gold at a Winter Games. Watch him soar in this crazy sport.

You can see the performance with English commentary here, as well as those of the Canadians Max Parrot and Mark McMorris, who won silver and bronze. -via reddit 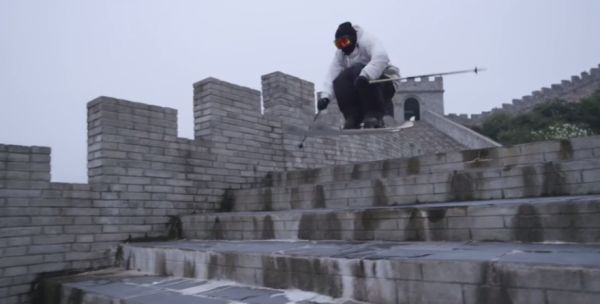 We've posted videos of professional skier Candide Thovex before, and they are always impressive. But the amazing Alpine skier doesn't even need snow to impress us!

Watch him ski over sand, dirt, grass, volcanic ash, rock, bricks, brush, and water in some of the most beautiful places on earth. And he gets serious air when the mood strikes him. All for a car ad. But when you've got a sponsor who'll send you to such places, you go! -Thanks, Ken D! 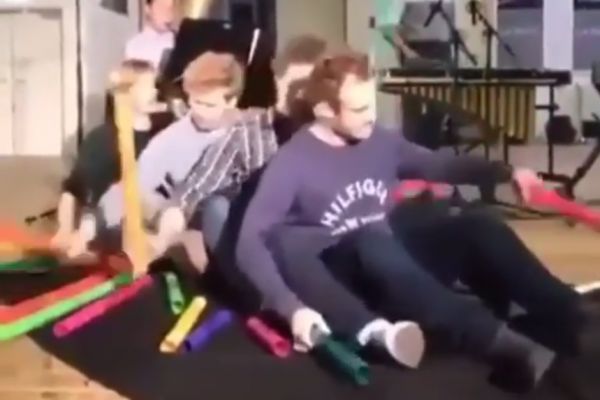 This video was presented as "bro's night out," which makes it seem like a silly game, but watch and listen. These guys are making serious music! Well, maybe not 'serious' music, it's the theme from Knight Rider followed by the theme from The Flintstones, but they do it well.

They are playing musical instruments called boomwhackers, or tubes that are tuned to a musical pitch to be played like bells. The group is Louie's Cage Percussion, made up of classically-trained musicians from Austria.

Named after the Monkey King Louie and the composer John Cage, this percussion group consists of six talented young musicians in their twenties. They are some of the youngest members of renowned Austrian orchestras including the Vienna Volksoper, the Lower Austria Tonkuenstler Orchestra and the Graz Opera and play all repertoires of classical music. Besides their studies of classical music, they have always been interested in jazz, rock and electronic music and have played in various bands and broadened their knowledge of various musical genres.

You can get an idea of how boomwhackers work from an extended cut of one of their practice sessions. Now watch a stage performance from Louie's Cage Percussion. 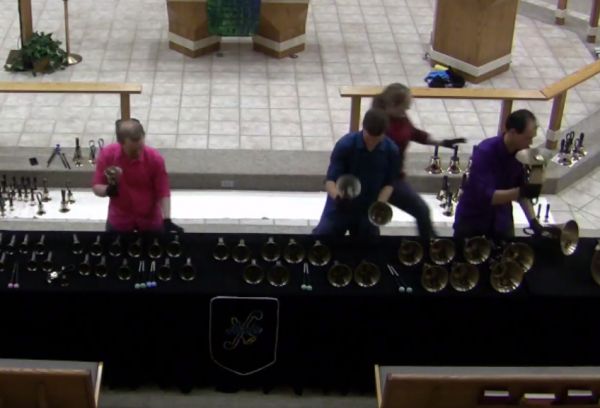 The handbell choir at my church has been shorthanded since my kids left for college. Last week they were down to four people, and the pastor jokingly called them a quartet. They played a simple song, nothing like the Hallelujah Chorus. The Forté Handbell Quartet shows that it can be done, if you are in good physical condition.

The Forté Handbell Quartet adapted Michael R. Keller’s arrangement of the piece to fit in with their strap-line ‘Rethink Possible’ – a mission to test boundaries and question the norms around classical music.

Weaving between each other, darting here and there to grab the correct handbells, the Forté Handbell Quartet do just that.

Besides the running and risking knocking each other down, there's the difficulty of not seeing the sheet music as you scramble for the next note. I am impressed. -via Metafilter 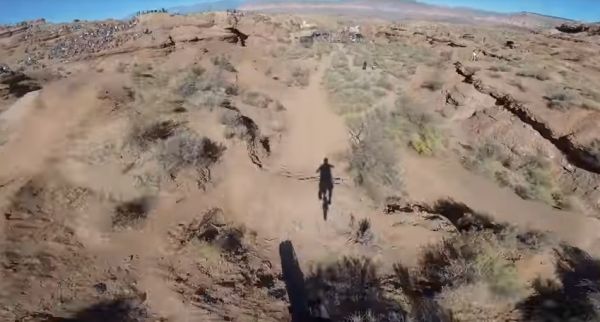 Antoine Bizet participated in the 2017 Red Bull Rampage, which I assume is a bike race, with a GoPro on his helmet. The course looks completely insane from this angle. It packs in quite a few terrifying moments in little over a minute. Make sure you have something to hold on to while you watch.

You couldn't pay me enough money to try biking down such a narrow trail at that speed. But Bizet flips, he jumps, he flies through the air, and he won the People's Choice Award for his run. -via Geekologie 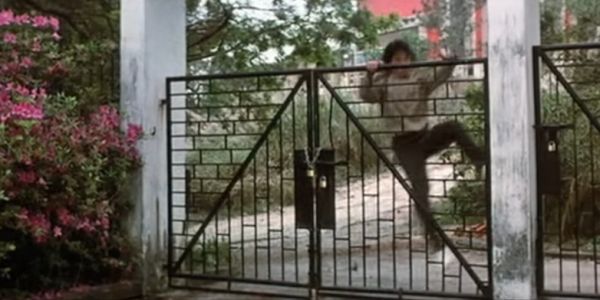 This supercut shows how movie star Jackie Chan surmounts obstacles: fences, walls, buildings, and other barriers. He does it in style.

It's no wonder his films always feature a chase scene on foot! The word "climb" doesn't really do it justice. It's more like he dances over obstacles. In one minute, Chan gets over over eleven barriers, and makes it look effortless. -via Tastefully Offensive