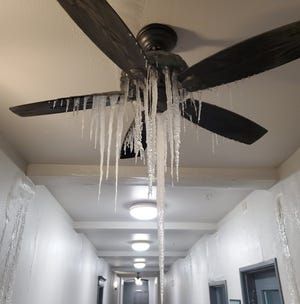 Dallas resident Thomas Black posted an image to social media of icicles hanging off a ceiling fan in the hallway of an apartment building. If that doesn’t tell you how cold it was in Texas, then I don’t know what else could show that the winter weather has frozen much of Texas. From a frozen pool, to iced-over hallways, and to pipes bursting everywhere, the winter in the area is historically insane:

"Pipes are busting everywhere,” said Black, whose apartment has lost water but mostly kept its power.

At least 20 people have died because of the intense cold and a series of storms that moved from coast to coast over the past few days. In Texas, about 3 million homes and businesses remained without power Wednesday.

The winter storm could be a "once in a generation" event for Texas when factoring in the brutally cold conditions, AccuWeather meteorologist Brandon Buckingham said earlier this week.

But the state is bracing for more winter weather in coming days, as over 100 million Americans are in the path of another winter storm tracking from the Plains to the East Coast, the National Weather Service said.

Reply
i believe it, i have a sister in texas
Abusive comment hidden. (Show it anyway.)
Start New Comment Thread...