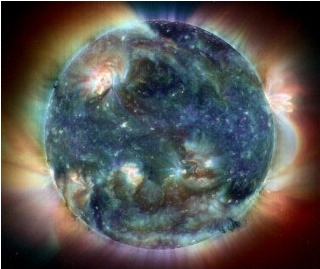 We have seen a couple of solar flares this year that gave us beautiful auroras in areas that don't normally see such lights. But that was nothing compared to the coronal mass ejection known as the Carrington Super Flare in 1859.

That night there was scarcely a square inch of earth that was not illuminated by aurora. As far south as the Rocky Mountains the sky became so bright that birds began chirping and campers awoke and began cooking breakfast. Blood-red auroral light hovered over Cuba and Hawaii. The already-rattled telegraph operators at the American Telegraph Company found their equipment sputtering high-voltage nonsense messages most of the next morning, and some offices reported injuries and property damage due to electrocutions and fire.

If a solar flare of this magnitude were to happen again, the good news is that we'd know about it ahead of time. The bad news is that with modern electrical grids, the damage would be much, much worse. However, the complete opposite, meaning a lower than usual number of sunspots, can cause dangerously cold weather, as it did in 1709. Read about solar weather and its effects at Damn Interesting. Link