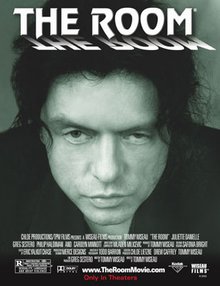 The following is an article from Uncle John's Heavy Duty Bathroom Reader.

If you're a fan of cheesy films like Manos: The Hand of Fate, Plan 9 From Outer Space, and Troll 2, you'll love this one. Uncle John saw it last when our local Bad Film Society screened it, and as he was watching, it occurred to him that it actually gave new meaning to the word "bad." (But somehow he couldn't stop talking about how great it was.)

On June 2003, a film called The Room premiered in a handful of Los Angeles theaters. It's the story of a love triangle between Johnny, a banker; Lisa, his girlfriend; and Johnny's best friend Mark. The film was the brainchild of Tommy Wiseau, the actor who plays Johnny. Wiseau wrote, directed, produced, and distributed the film. He financed The Room, too, shelling out $6 million of his own money to make it, plus thousands more on print and TV ads and a single giant billboard overlooking busy Highland Avenue in Los Angeles.

The Room was Wiseau's first feature film. He hoped to use it to launch a Hollywood career... but all he succeeded in doing was blowing $6 million in record time. The Room played to nearly empty theaters for just two weeks before it was yanked from the screen; in that time it had grossed only $1,900, not enough to cover even one month's rent on the Highland Avenue billboard. Put another way, for every million Wiseau spent, The Room earned less than $320, making it one of the worst box-office flops in history.

Is there anything about The Room that isn't bad? The acting is stunningly incompetent- none of the actors had ever had a major film role before, and Wiseau was incapable of providing decent direction. And the love scene between Johnny and Lisa is creepy (picture a Troll doll having its way with a seat cushion, except that Lisa is the cushion). Wiseau recycles the footage in a second love scene 20 minutes after the first, so you get to watch it twice.

As a screenwriter, Wiseau was even worse. New characters appear out of nowhere and aren't properly identified, so it's never clear who they are. A number of subplots -such as drug abuse, unrequited love, and bad real estate deals- are introduced, then quickly abandoned. ("I got the results of the test back. I definitely have breast cancer," Lisa's mother tells her, and the subject never comes up again.) And though the thickly-accented Wiseau refuses to this day to say where he comes from, English is clearly not his first language. The Room is full of clunky, confusing, and unintentionally funny dialog: When a (never-identified) character catches Lisa and Mark kissing at Johnny's birthday party, and confronts them, Mark yells, "Leave your stupid comments in your pocket!"

The movie likely would have died a quick and unmourned death had an aspiring young screenwriter named Michael Rousselet not happened to see the film near the end of its two-week theatrical run. As Rousselet sat alone in the empty theater, he was stunned by what he saw- bad lighting, out-of-focus scenes, dubbed dialog out of sync with the lip movements onscreen, poorly designed sets (it's never clear which room is the room, or why the room is so important), one wooden, sophomoric acting performance after another, and much, much more. Whenever Rousselet thought that The Room had given all that it had to give, it would cough up some wonderful new chunk of mediocrity and incompetence for him to savor. It was unlike any film he'd ever seen. Sure that such a flop would never make it onto DVD, Rousselet sat in an empty theater (while the movie was still running) and called everyone he could think of on his cell phone, telling them they had to see The Room for themselves before it vanished forever.

That theater didn't stay empty for long. Though The Room died at every other venue where it was shown, Rousselet's promotional work paid off at this one. A small crowd of friends joined him at the next showing, and as these people phoned their friends, the numbers grew steadily at each remaining screening. "We saw it four times in three days, and on the last day had over 100 people there," he told Entertainment Weekly in 2008.

By the time The Room ended its theatrical run, a small but dedicated fan base had already begun emailing Wiseau to thank him for his efforts and ask him to screen the film again. Wiseau received dozens more emails in the months that followed, and in June 2004 he booked a small theater in West Hollywood for a single midnight screening. That event was a hit -so many people turned out to see the film that Wiseau booked another midnight showing a month later, then another, then another.

As the crowds continued to grow like lookie-loos at a traffic accident, he expanded to two screens at the multiplex, then three, then four, and then five. Strong word of mouth among a steadily growing fan base of "Roomies," as they call themselves, led Wiseau to schedule screenings in cities up and down the West Coast, then in other parts of the United States and Canada, and eventually in Great Britain. And with foreign-language editions reportedly in the works, The Room may soon have fans all over the world.

Have you ever been to a showing of the 1975 film The Rocky Horror Picture Show? As was the case with that cult film, The Room's fans have created audience participation rituals all their own. Roomies attend screenings dressed as their favorite characters, shout out their favorite bad lines at the appropriate moments, yell "FOCUS!" during blurry scenes, march out "in protest" during the troll doll/seat cushion love scenes, and throw plastic spoons whenever the spoon photograph in Johnny's apartment appears. There's no question that the Roomies are there to laugh at Wiseau and his masterpiece, but he says he doesn't mind. "As long as they laugh or enjoy themselves, I enjoy with them," he says.

NO ROOM AT THE ROOM

If you're ever in L.A. on the last Saturday of the month, go see The Room. Buy your tickets early- even when the film is being shown on five screens, The Room sells out quickly, especially when Wiseau or other stars appear in person. Wiseau's fabulous flop has been reborn as the hottest cult phenomenon in decades, and at an estimated gross of more than $1,000 per screening, The Room is on track to break even sometime in the year 2504, maybe sooner if you consider profits from The Room t-shirts, CDs, DVDs, movie posters, and talking Johnny bobblehead dolls. 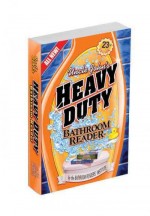 The article above was reprinted with permission from the Bathroom Institute's newest book, Uncle John's Heavy Duty Bathroom Reader.

@Randi - Not viral enough! This is the greatest post ever. I'm downloading the movie now and planning on doing a screening for my friends. Thank you Neatorama. It's never too late for the awesomely bad.
Abusive comment hidden. (Show it anyway.)
What are you sorry about, Randi?

We published an article about Pearl Harbor with 60-year-old news. We published an article about the Rocky Horror Show, and that went viral about 35 years ago. And according to this article, The Room went viral in 2004, which is, hmmm, almost seven years ago.
Abusive comment hidden. (Show it anyway.)
Wow, sorry neat, but this is really old news. This went viral like 2 years ago.
Abusive comment hidden. (Show it anyway.)
My favorite part is at the end, when Denny screams "Tommy" instead of "Johnny" and no one really cares or even notices that he messed up. You know, just leave it in there, no one will notice.

Sadly, "The House That Drips Blood On Alex" isn't nearly as Wiseau-tastic.
Abusive comment hidden. (Show it anyway.)
This is a huge hit among my friends - we own it on DVD and have watched it at least five or six times. The kicker was that Wiseau and Greg Sestero (Mark) came to do a Q&A at my school - I got to meet them and take pics, it was awesome. That night, they screened it at Coolidge Corner Theater in Boston along with another Q&A - i hope they screen it again there, it's as much fun as rocky horror if not more
Abusive comment hidden. (Show it anyway.)
Login to comment.