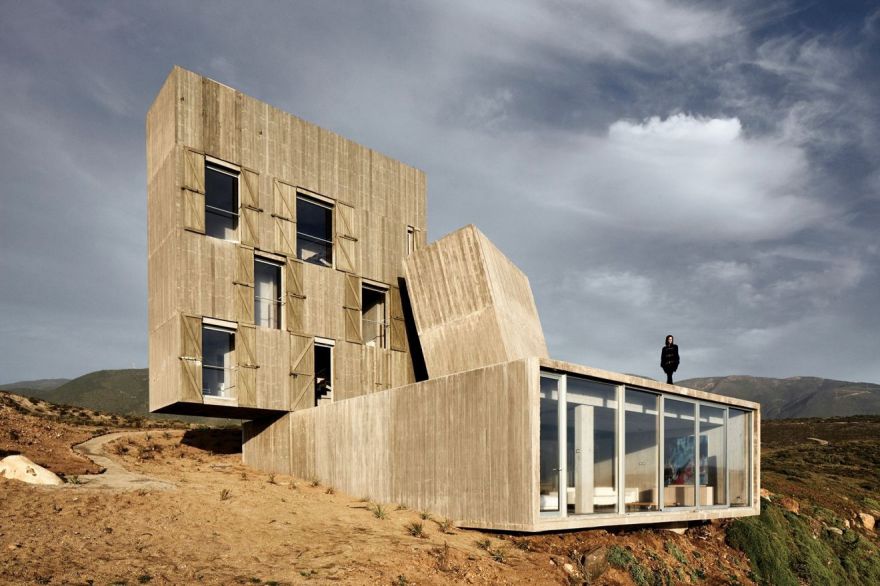 Casa OchoQuebras is a weekend home perched near the Chilean coast and the Pacific Ocean. A project of a Chile-based developer Ochoalcubo, the structure is a convention-defying dwelling composed of three geometric volumes, one of which tips at a seemingly precarious angle between the two others, as Plain magazine detailed:

The retreat was inspired by the primitiveness of its location, and this is manifested in the studio’s choice of materials – wood and concrete – and in its bulky, unembellished silhouette. “We chose to move backwards towards the archaic, not as a nostalgic escape but as a natural filter against clichés,” the studio says. “In an era where the hunger for novelty is threatening architecture to become immediately obsolete, we looked for timelessness.”

The horizontal volume houses a self-sufficient living area, with a staircase leading to the vertical part of the home appointed with additional bedrooms and an access to the rooftop terrace. Rounding it up is a basic fire pit enclosed by the leaning, hollowed-out form that acts as a chimney stack. Stripped to the mere essentials, the home seamlessly blends into the brutal landscape. “We expect these pieces to age as a stone, acquiring some of the brutality of the place but still being gentle for people to enjoy nature and life in general.”