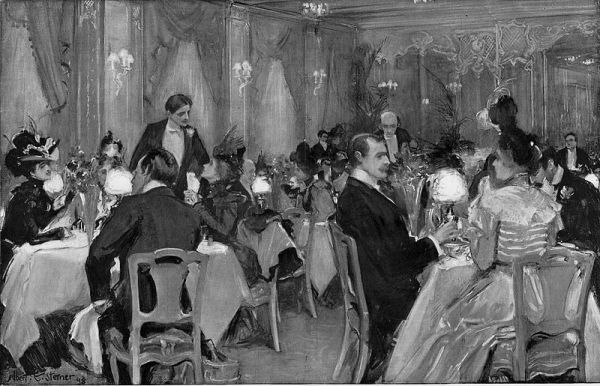 While travelers have always been able to get a meal at a pub or an inn in America -as soon as there were pubs and inns- the fine dining restaurant only came into fashion in the 1830s, soon after the French began such businesses. Historian Paul Freedman has been searching and cataloguing the menus of early American restaurants, between 1838 and 1865, to see what kind of food they were serving.

For one thing, it was fashionable for European visitors to complain about American food. Famous visitors like Frances Trollope groused that it was “abundant but not delicate” in 1832. Ten years later, Charles Dickens’s first trip to America was “a culinary disaster.”

Americans were also renowned for eating with great speed: Delmonico’s scheduled an average of eight to ten minutes per course for their fourteen-course meal. Dinner was served from 2 p.m. to 5 p.m. Food could still be had later in the evening, but choices were more limited.