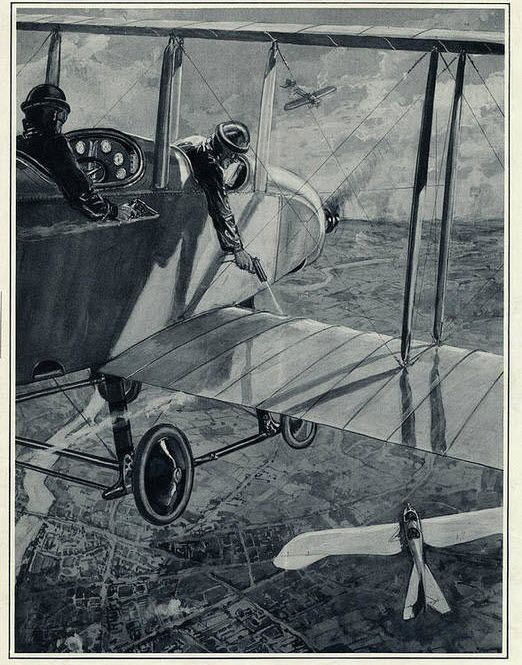 The first planes before and during World War I didn’t pose much danger. Back then, they were only used for reconnaissance and surveillance of enemy territory. Information back then was as valuable as it is today. However, once opposing forces used the same tactic against each other, there became a realization to add weapons on the rather new invention. With the addition of weapons on planes came dogfights.

The first dogfights were made with pistols. The pilot held the airplane’s control stick with one hand and fired off his pistol to the sides with the other. Then a second crew member, the gunner, was added. Sitting on the backseat, his job was to operate a movable machine gun leaving the flying to the pilot. It was German aviator August Euler, who first saw the advantage of a forward-firing gun that could bring down an enemy from behind. Euler patented his design in 1910—four years before war started.

Euler’s design was met with criticism, however.

“The idea of coupling the firing mechanism to the propeller's rotation is an affectation. The objection is the same as to any gun position which is fixed along the longitudinal axis of the aircraft: the pilot is forced to fly directly at the enemy in order to fire. Under certain circumstances this is highly undesirable”, wrote German Major Siegert.

But putting a forward-firing gun on a plane proved to be very difficult. It wasn’t until Anthony Fokker came into the scene with his synchronization gear that the first true fighter aircraft would be born.

More about this over at Amusing Planet.

In an ex-post consideration the development of the singe seat forward shooting figher plane seems just unavoidable. starting form limited resources: as the power of aerial engines was limited a two seater is always less maneouverable than a singe seat aircraft, assuming they use the same engine. Not shooting in the direction of movement subjects the projectile to the airflow signigicantly changing the ballistic trajectory of a prjectle fired sideways. Operating an aircaft while simultaneous aiming and firing a gun seems not to be very promising... However it is possible to just mount the guns on the top wing of a biplane or use wing mounted machine guns, finring outside the proppeller area... Placing the guns directly in fron of the pilot has the advantage that the pilot can check and de-jam them once they stopped firing...
Abusive comment hidden. (Show it anyway.)
Timing is everything if you are a Fokker.
Abusive comment hidden. (Show it anyway.)
bang bang
Abusive comment hidden. (Show it anyway.)
Start New Comment Thread...