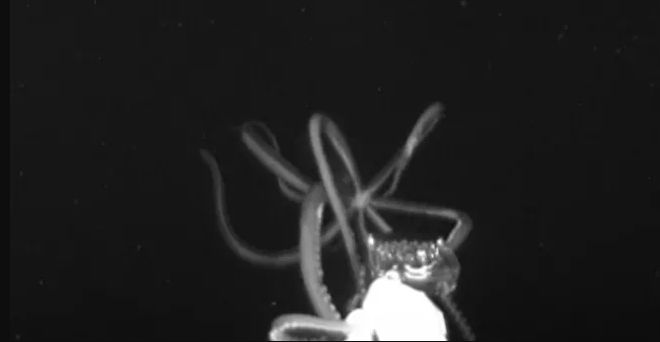 Meet the Architeuthis dux, the world’s largest known squid. The animal is capable of growing to about 46 feet (14 meters long)! For reference, that is about the length of a semi-trailer truck. This huge sea animal inspired the tales of krakens, and now with scientists catching the elusive squid on camera, we can say that we finally have footage of a live kraken (well, sort of):

Now, a study published online in the journal Deep Sea Research Part 1: Oceanographic Research Papers delves into why these giants of the deep are so elusive, and explains how a team of researchers was able to capture the first footage of A. dux in its natural habitat in 2012, and again in 2019 in the Gulf of Mexico.

According to the study authors (many of whom were present for the 2019 giant squid sighting), the creature's evasiveness is due, in part, to its enormous eyes.

Giant squids can live thousands of feet below the ocean's surface. Very little sunlight can penetrate this deep so to adapt, the giant squid evolved the largest eyes in the animal kingdom. Each of these cephalopods' peepers are about as large as a basketball — roughly three times the diameter of any other animal, Live Science previously reported.

These huge eyes not only help giant squids make their way around the deep, dark ocean, but probably also make them extra sensitive to the bright lights that marine researchers mount to their submersibles and underwater cameras, according to the study authors. That sensitivity could explain why giant squids are so hard to find in their natural habitats; by the time a research vehicle reaches a squid's swimming grounds, the squid has long since fled the craft's lights and vibrations.