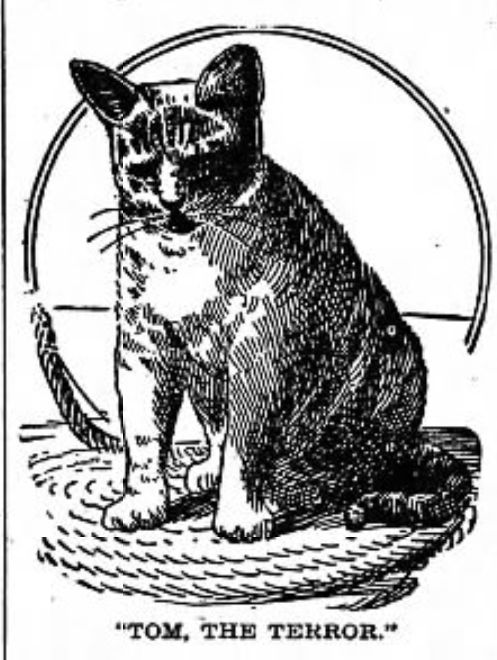 Tom was born in 1896, and spent his first two years catching rats and mice in the Brooklyn Navy Yard. He was a scrappy cat, fighting other cats and generally doing whatever he pleased. Then he decided to join the navy. He wandered aboard the USS Terror and decided that's where he wanted to live.

Tom was immediately adopted by the crew of the Terror, and full enlistment papers were drawn up giving him the rank of rat killer and mascot. The papers were properly filed, and Tom’s life at sea as a member of the United States Navy began.

Following Tom’s service during the Spanish-American War, where he worked alongside other navy cats such as Tom of the USS Maine, the USS Terror returned to northern waters. Tom and the rest of the crew joined the receiving ship Franklin.

From the Franklin, Tom was transferred to the USS Monongahala, which at this time was a ship-rigged sail training ship for the United States Naval Academy. Life on board the ship was made as pleasant as possible for Tom, but as they say, you can take the cat out of Brooklyn, but you can’t take the Brooklyn out of the cat.

While Tom discharged his pest control duties well, he did not like taking orders, and eventually became a deserter. Read how he got away from his commanding officer and evaded a search to join another ship at The Hatching Cat. -via Strange Company