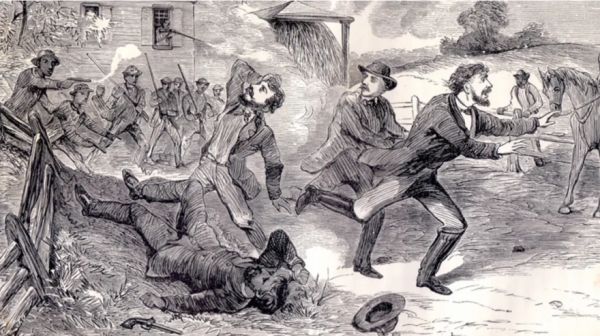 The United States was anything but united in the years leading up to the Civil War. The Fugitive Slave Act of 1850 threw the question of state's rights up in the air. The act obligated free states to return escaped slaves to their owners, which meant the federal law favored the rights of slave states over the rights of free states. This led to a battle that some consider to be the first of the American Civil War, which didn't officially begin for another ten years. William and Eliza Parker had escaped slavery in the south and settled in Christiana, Pennsylvania. In 1851, they were approached by four men who had escaped from Maryland. Slave owner Edward Gorsuch went to find them and demand the return of his "property."

Shortly before dawn on September 11, 1851, Gorsuch’s party arrived at the Parker house. They were met with William’s assertion that they would fight to the death before surrendering. When Gorsuch tried entering the home, Eliza repelled him by throwing a fishing spear his way. She then went to the window and blew a horn used to alert their neighbors of such trouble. Gorsuch’s party opened fire to stop her, but she kept up the alarm, encouraging all in the house to stand against recapture, no matter the cost. When one of the men in the Parker home suggested surrender, William replied, “Don’t believe that any living man can take you.”

Neighbors were quick to arrive, many armed for defense. The Gorsuch party thought the white neighbors had arrived to help them, and were shocked to discover their error. William Parker and others tried to persuade Gorsuch and his men to leave without violence, but the latter insisted on having “his property.” Both sides opened fire. Before long, the Gorsuch party was either injured on the ground or fleeing with empty guns. One of the men Gorsuch had tried to recapture beat him with a rifle until he collapsed. As for Gorsuch’s death, per William’s memoir, “The women put an end to him.”

The bigger part of the story is the trial that followed, in which 39 men were charged with treason. Read how that turned out at Mental Floss.