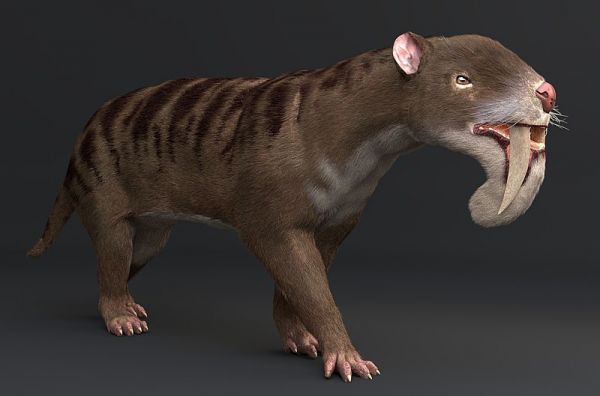 Now, this is one weird-looking animal. It's called Thylacosmilus, and it was a South American marsupial that lived around three million years ago. Note the huge saber teeth, as big as those of the saber-toothed cat, or Smilodon, that lived quite a bit after Thylacosmilus. But even weirder is the lower jaw that accommodated those teeth. A comparison between Thylacosmilus and Smilodon reveals that despite the teeth, they were very different animals.

At a time when South America was still an island, Thylacosmilus did not occupy Smilodon’s apex niche. Large “terror birds,” which could grow taller than a person, with a two-foot long skull that was mostly beak, may have been the dominant carnivores. Thylacosmilus appears to have filled a unique ecological niche, one that even modern scavengers, such as the relatively indiscriminate, bone-chomping hyena, don’t quite fit: a scavenger that was careful with its food, targeting the softest tissues, such as internal organs rather than muscle or bone.

Read about Thylacosmilus and its unique ecological niche at Atlas Obscura.