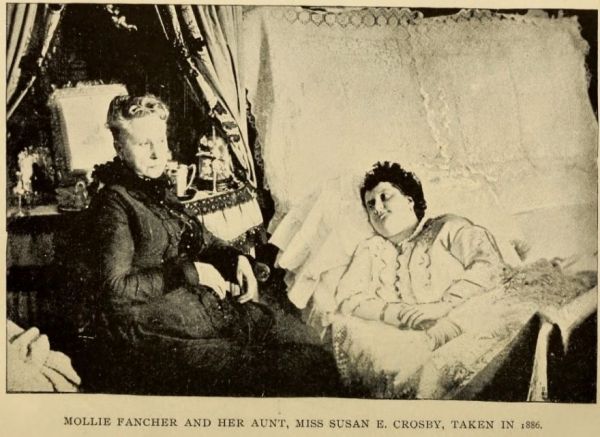 In 1865, 17-year-old Mollie Fancher fell from a trolley in New York and was dragged behind by her scarf. She survived the accident, but spent the next 48 years in bed, until her death in 1916. Fancher became rather famous for the psychic abilities she developed in her invalid condition, and she reportedly gave up food and drink, saying she no longer needed it.

Fancher slowly recovered from basically being declared dead by her physician, and claimed to experience a series of trances. She had lost her sight, but, placing her hands behind her, claimed to see through the back of her head. “I am sometimes conscious of what others are not,” she said, and explains how she stopped eating. “I rejected it. My doctor thought I was insane, but, as a matter of fact, I had never been more rational in my life.”

She claimed she could read, even without use of her eyes, and predict the future; she created beautiful tapestries despite the fact that her hands were paralysed. You can actually find one of her creations on display at a hotel in Lily Dale, New York’s “Village of Psychics”, a blossoming Spiritualist community during the time of Mollie Fancher’s notoriety.

Fancher was never put to a test about her fasting, nor about her psychic abilities. But she was only the most famous of the "fasting girls" of the Victorian era, and others who were put under medical supervision actually died of starvation. Were they frauds, victims of anorexia nervosa, or was it something else entirely? Read about Fancher and the other fasting girls at Messy Messy Chic.